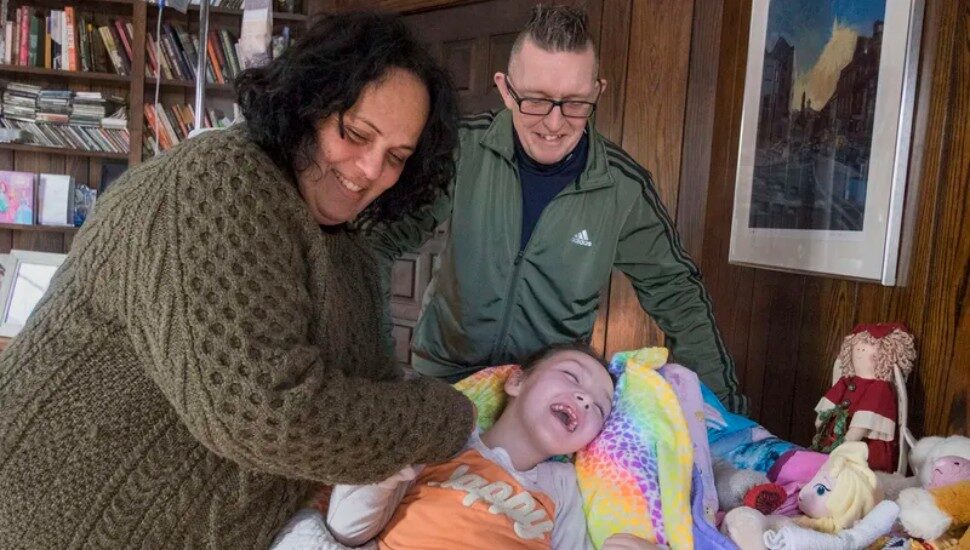 Image via Ed Hille, Philadelphia Inquirer.
Cal, with her mother and father, share a lighthearted moment in 2017.

Calliope Joy Carr, a Bala Cynwyd girl who had a rare degenerative genetic disease and inspired many to make life better for children like her, died aged 12 of metachromatic leukodystrophy on March 24, writes Gary Miles for The Philadelphia Inquirer.

Cal, as she was known to her family and friends, was diagnosed with the devastating disease when she was two, and over time she lost the ability to walk, eat, talk, and see.

“She was independent and bright and ran her own life,” said her mother, Maria Kefalas. “She did things on her terms.”

Cal spent last the eight years of her life in hospice care at home. Her family and caregivers marveled at the joy she always found in life, often laughing so loudly that her voice echoed through her home.

Her family started the Calliope Joy Foundation, which has sold more than 43,000 cupcakes and raised almost a million dollars to raise awareness of the deadly disease and other rare ailments and support families who grapple with them.

“Even to people like me, who had never met her, it was an honor and a privilege to have watched her story unfold,” a person said in an online tribute.

Read more about Calliope Joy Carr in The Philadelphia Inquirer.

New Book by St. Joseph’s Professor Searches for Meaning During Hardest Moments of Her Life