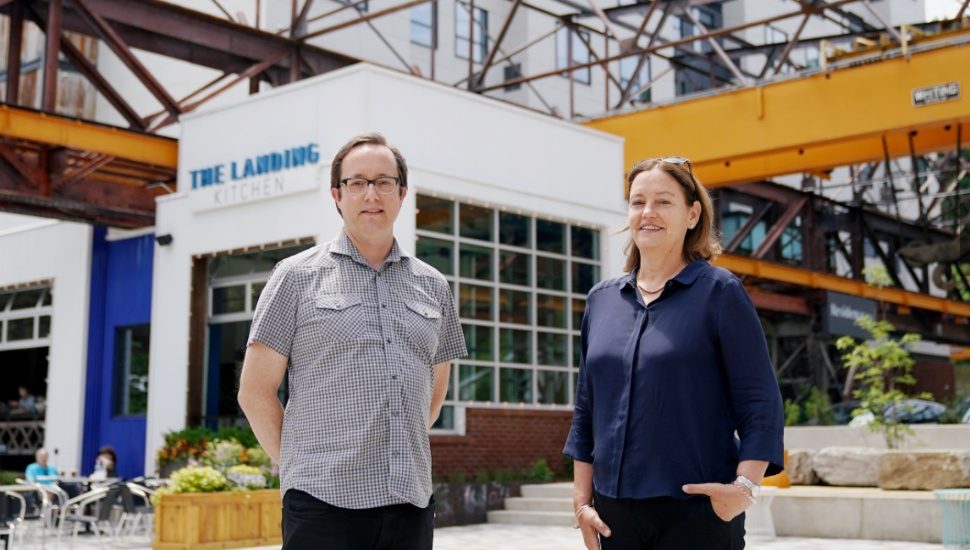 The development of Pencoyd Landing has created one unexpected benefit for the Lower Merion residents: a walkable riverfront, writes Inga Saffron for The Philadelphia Inquirer.

Previously the industrial sheds that housed the blast furnaces for Pencoyd Iron Works a century ago created a long wall across the Schuylkill waterfront which prevented most of the vegetation around it from taking root.

Today, the picture is drastically different.

Since being reinvented as Pencoyd Landing, the area has lost its walls and now stands surrounded with lush greenery.

The factory – which only remains as a bare steel frame – is now home to a modern waterfront complex that enjoys the benefits of an elegant river walk and boasts a small Victorian castle, a Marriott hotel, and terrace restaurant.

To take full advantage of the riverfront, Penn Group co-owner Donna Galvin insisted on having all the entrances at trail level, despite the site technically being in a floodplain.

However, Galvin decided it was worth taking the chance because Lower Merion bank is much higher than usual at 25 feet above the river.

The risk paid off as the site offers spectacular views of the river, Pencoyd Bridge, and Manayunk.

Read more about the development in The Philadelphia Inquirer.