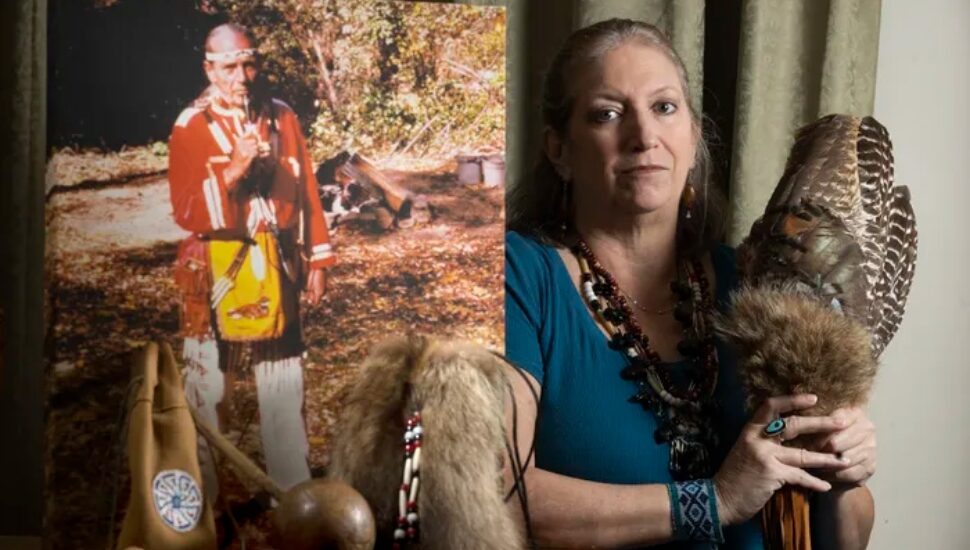 Image via Charles Fox, The Philadelphia Inquirer.
Ann Remy, right, next to a photo of her grandfather, left, Chief Whipoorwill at the Churchville Nature Center.

The lands belonging to Ann Remy’s Lenni-Lenape ancestors used to cover the entire Philadelphia region, along with parts of New York and Delaware, and the entire New Jersey, writes Jeff Gammage for The Philadelphia Inquirer.

This is no longer true, as the land was taken, stolen, bought, then sold again multiple times across centuries.

Now, governments and big institutions are slowly starting to publicly acknowledge they sit on land that rightfully belonged to others. With the rise of “land acknowledgments,” indigenous leaders and activists are hoping officials will move beyond just words.

“It would be nice if they went a step further with events to educate people, or using the original names for places,” said Remy, a Penndel activist with the Coalition of Natives and Allies.

For Terry Shepard, a member of the Stockbridge-Munsee Community of the Mohican Nation and Bryn Mawr resident, actions are more important than words. He said that more colleges and schools could provide Indigenous students with scholarships and add courses on Native American history. Meanwhile, businesses could offer internships and jobs.

In Chester County, things have moved a step forward as some private landowners have given acreage to Natives.

Read more about the activists’ efforts toward land acknowledgments in The Philadelphia Inquirer.

The Lenape Lived in Pennsylvania, Now They Want to Come Home

Lenape Burial Site in Chester County Seeks to Donate the Land, but It's Complicated