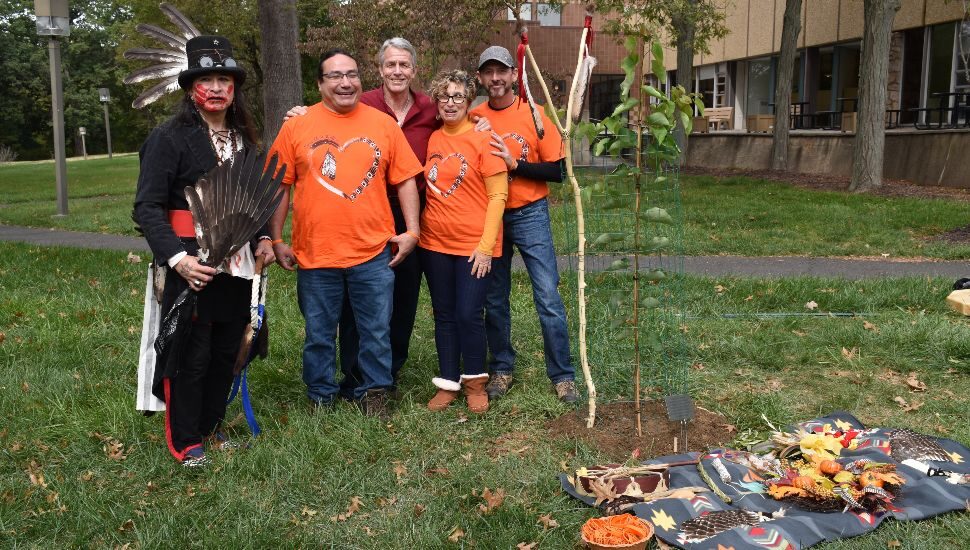 Gwynedd Mercy University held a tree planting to mark Orange Shirt Day, remembering Indigenous children who were mistreated by educators over the past century.

An orange shirt has come to symbolize native populations who were stripped of their cultural identities in the name of educational assimilation.

In 1973, six-year-old Webstad reported to a mission school in British Columbia, wearing an orange shirt that laced down the front.

Her grandmother had purchased the item just for the special occasion.

When she arrived at school, the faculty removed it from her, a practice it enforced on all students wearing clothing or accessories that reflected a Native heritage.

Webstad never forgot the confusion and shame of that early incident. As an adult, she now tours and speaks frequently, raising awareness about the impacts of the Indian Residential School system that treated her and so many other disrespectfully.

To inform youngsters who may also face public shame about their heritage, she has written two children’s books, Orange Shirt Story, and Phyllis’s Orange Shirt.

The gathering cited some rather stark statistics as compelling the event: From 1819–1969, 408 boarding schools operated in 29 U.S. states. The Interior Department has documented more than 500 deaths of Indigenous children housed in these schools, but it’s estimated to be far from a complete count.

The Sept. 30 GMercyU event included traditional prayer and smudging, a cultural burning of sacred medicines to cleanse the air, mind, spirit, and emotions.

The Orange Shirt Day honorific was held at the Main Campus Bell Tower.

More on this heartfelt remembrance is online.