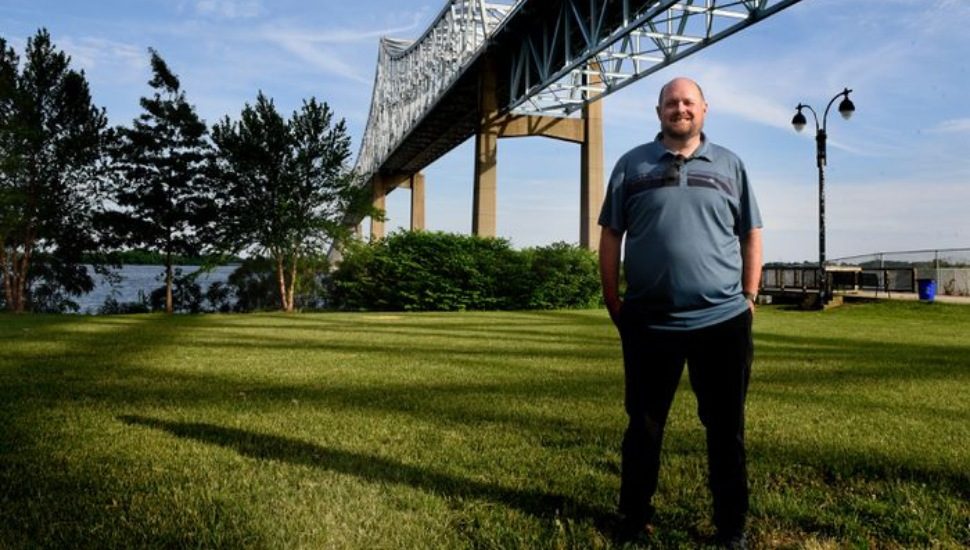 Image via Tom Gralish, the Philadelphia Inquirer.
Film locations scout Rudi Fischer poses under the Commodore Barry Bridge in Chester. It's one of the sites he helped scout for "Mare of Easttown."

Part of the thrill of HBO’s “Mare of Easttown” was picking out local places you recognize, writes Maria Panaritis for The Philadelphia Inquirer.

Did you peep the houses and streets in Mont Clare where they filmed Dylan Hichley’s house, or the gas station in front of Nudy’s in Phoenixville, which is now a real estate office.

He knows the area, as he’s from Horsham in Montgomery County and a graduate of Hatboro-Horsham High School.

The film crew also found that the connectedness featured in “Mare” really did exist in Delaware County.

Maria Panaritis was in Marcus Hook with Rudi Fischer when a random man in front of a rowhome let them know he was attached to the show. “That fish tank that’s in the show?” resident Cliff Light exclaimed, “I sold it to the fish store.”

In the show, the tank was bought by Mare Sheehan for her grandson’s turtle.

In the real world, the tank came from an Aston shop, Aquarium World. They got it from Cliff, like he said.

“The owner told me,” Light said. “Me and him are friends. Aquarium World. That’s right up in Aston, right across the street from the best cheesesteaks you’ll get.”

Beyond location, that’s the feeling “Mare” worked so hard to capture.

Read more at The Philadelphia Inquirer about the local places used in “Mare of Easttown.”

Believe It or Not, There Are Healthy Options at Your Montco Wawa. But First, Coffee