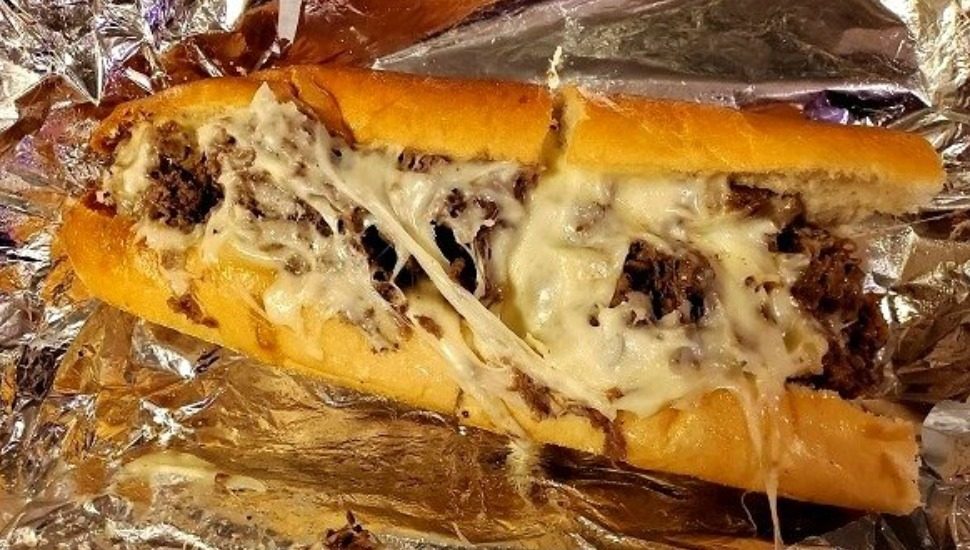 Image via MyPhillyAlive.com
Which cheesesteak is No. 1?

Many Montgomery County spots made a list of 60 cheesesteak favorites in the Philadelphia region, writes Jeff Belonger for myphillyalive.com. The list, ranked highest to lowest, is part of a seven-day tour to find the ultimate Philly cheesesteak.

The tour covered Philadelphia, the surrounding counties, and parts of New Jersey.

Reviewing, and eating their way through 60 different places and cheesesteaks, they met great people, ate great food, and found the number one cheesesteak—and it’s in Montco.

With this rating system between 5.0 to 10.0, ranging from ‘Barely on the radar as a sandwich,’ (5.0-5.9) to ‘The Immaculate Reception’ at 10.0 (based on one of the most famous plays in NFL history between the Pittsburgh Steelers and the Oakland Raiders in 1972.) So, I guess that’s saying this cheesesteak is insanely good!

They based the ratings on a cheesesteak with American cheese and no onions to keep the taste testing results at an even keel so that onions/cheese ratios didn’t overwhelm taste of the meat.

Number 1, with a 8.97 average rating, was Mama’s Pizzeria, located in Bala Cynwyd, with bread from Conshohocken Bakery, Ribeye steak, and melty cheese. They use more than a pound of meat and cheese on a 10 in long roll, and this is their signature sandwich that people have been eating for years, since 1958. Add in their proprietary cheese blend and you’ve got a clear winner.

Goomba’s Pizzaria in Colmar has a rating of 8.37, and came in at 6th place.

Tonelli’s Pizza Pub in Horsham, at a rating of 8.28. Using Liscio’s Italian Bakery bread with Ribeye steaks, came in at 8th place.

Giuliano’s Deli in Lansdale tied with 2 others at 19th place with a rating of 7.9. They use Collegeville Italian Bakery bread along with chopped ribeye.

Ray’s Pizza in Lansdale was tied with three others and has a rating of 7.8. They use Conshohocken Italian Bakery bread and a Ribeye Porterhouse meat blend; tied with Via Marconi’s Pizza Pub in Hatfield, with a rating of 7.8, tied at No. 27.

Find out more about the tour at myphillyalive.com.

Food and DrinkSee Which Local Eatery Makes Some of Best Wings in Philadelphia RegionFebruary 13, 2021

Food and DrinkBaking Up the Best: These 4 Montco Shops Made the List of Top Philly Area BakeriesDecember 28, 2020