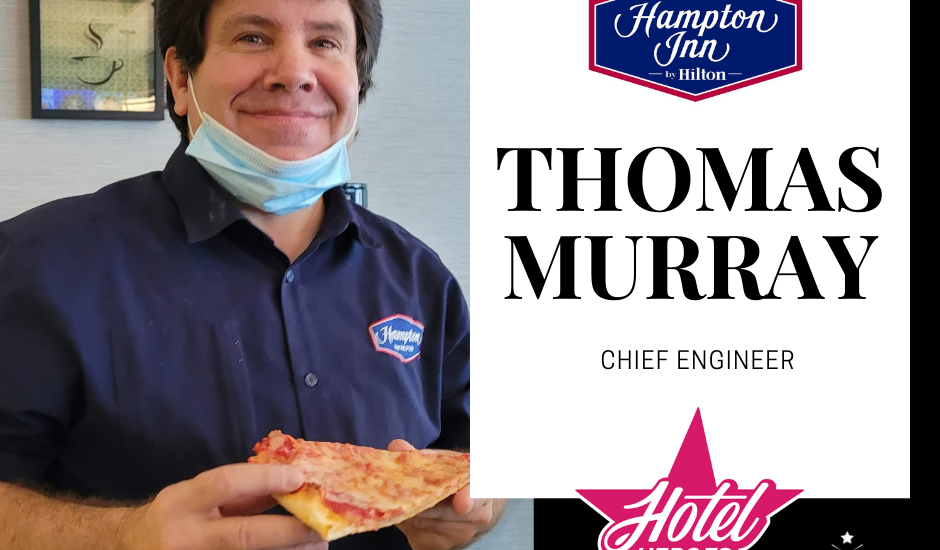 Nominated by Viveca Stinson, Director of Sales, Murray’s interest in engineering began when he was a young newlywed, and had to repair his home’s broken heater in the basement.

Soon after that experience, he enrolled in school to study Electronic Technology and learn more about heating and refrigeration.

Upon finishing his studies, Murray started working at the Radisson by the Philadelphia Convention Center, then moved to be the Director of Engineering at the Valley Forge Casino Resort from 2012 to 2015. This January will mark his fifth anniversary with the Hampton Inn Philadelphia/Plymouth Meeting.

“Tom is the kind of person who works tirelessly with a smile on his face,” said Stinson. “During the darkest of times, he did what he could to lift the spirits of everyone around him, while also jumping into whatever role the hotel demanded.”

“Since March, he has been a Houseman, Rooms Attendant, Laundry Attendant, Front Desk Agent, mentor, and friend. He has become an amazing support agent who is always willing to lend a helping hand. Tom is the kind of guy who regularly offers half his meal to others just so no one feels hungry, and has transported employees during odd hours who couldn’t get to work, or didn’t feel safe.”

“He is always looking out for others and even brought in his own grill on Housekeeping Week to show his gratitude to the team with a fresh, hot home-cooked meal. Tom does all of this out of the kindness of his heart. If you asked him why he does all that he does, he would say, ‘Well somebody’s got to do it.’ Tom would also say, ‘A man is nothing without his honor.’ He is a man of extraordinary honor, commitment, and heart. We couldn’t be prouder to have him as a leader in our hotel.”

The hotel staff being honored are a variety from sales directors to housekeeping attendants, and culinary team members all across the county, and are going above and beyond the call of duty in their lodging responsibilities.