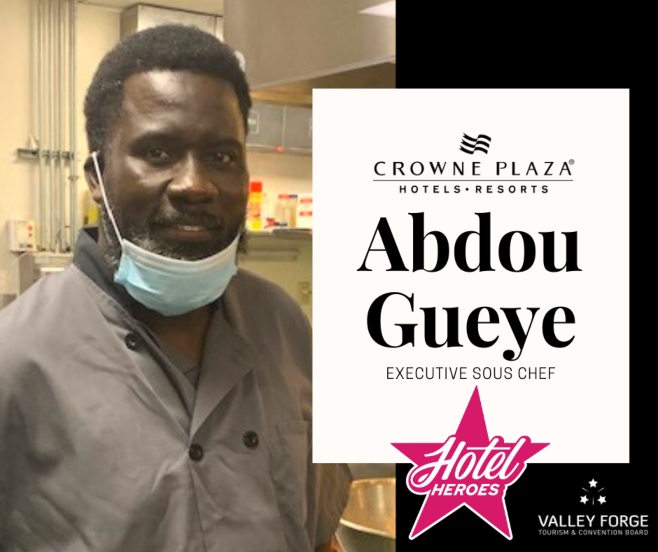 Abdou Gueye came to the United States in 1998 from West Africa to further his education. He graduated high school in Dakar, Senegal in 1992 and attended two years of college in a professional training program before coming to the U.S.

Now Gueye is an Executive Sous Chef at Crowne Plaza King of Prussia, where he’s been awarded Manager of the Quarter four times and Manager of the Year twice, most recently in 2018.

He has been recognized by the Valley Forge Tourism & Convention Board (VFTCB) as a “Hotel Hero” for his hard work and for going “above and beyond the call of duty” in his responsibilities.

Each week, the VFTCB is recognizing, hospitality employees, specifically during the COVID-19 pandemic, sharing their positive stories and spotlighting Montgomery County’s 80 hotels.

The “Hotel Heroes” are featured on social media, primarily Facebook and LinkedIn, that have more than 160,000 VFTCB/Visit Valley Forge followers.

Gueye was nominated as a “Hotel Hero” by Cybill Oliver, director of Human Resources.

“Gueye’s commitment to quality and excellence is unmatched,” Oliver said. “His creativity and ability to inspire others around him is truly a gift!”

Once he arrived in America, Gueye began working as an apprentice for Jeffrey Miller Catering in Lansdowne during that business’’ infancy stage.

During his tenure there he learned and excelled at the art of creating delicious, high quality food and beverages “from scratch,” which has always been Miller’s moniker.

Throughout the years, Gueye assisted Miller with numerous events, including weddings, corporate parties, meetings, and other social gatherings.

Gueye next worked for Food Source in Bryn Mawr.

Initially he was hired as a supervisor, but ended his tenure there approximately four years later as Executive Sous Chef.

During that time, Gueye naturalized as a U.S. citizen, and began working part-time at Crowne Plaza King of Prussia as a Sous Chef.

In 2008, he decided to commit to full-time hours, and was promoted to Executive Sous Chef.

The hotel staff being honored as “Hotel Heroes” have a variety of occupations, from sales directors to housekeeping attendants, and culinary team members all across the county.