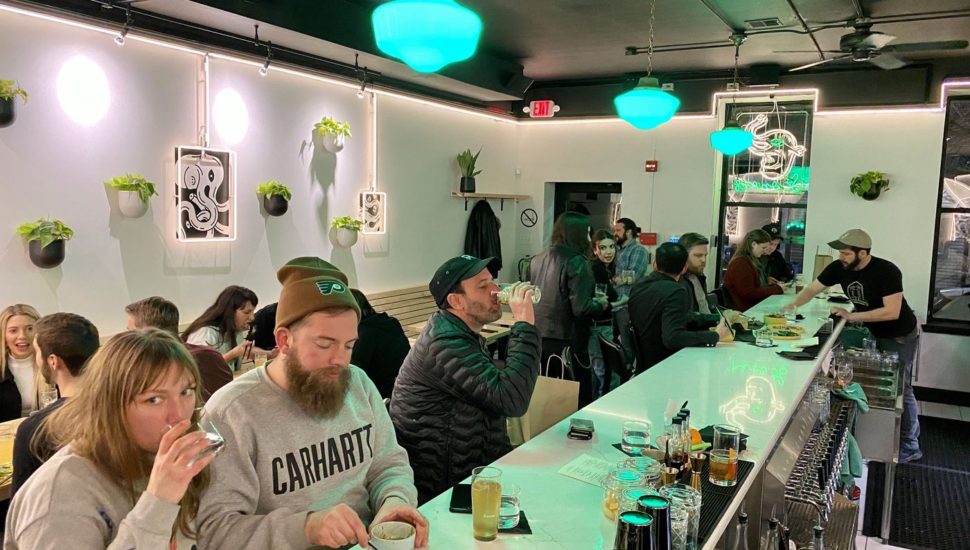 Ardmore-based Tired Hands Brewing has joined the suburban migration into the city with the opening of a new bar-restaurant in Fishtown. Image via Inquirer.com.

Ardmore-based Tired Hands Brewing has joined the suburban migration into the city with the opening of St. Oner’s, a new bar-restaurant in Fishtown, writes Michael Klein for The Philadelphia Inquirer.

The coolly elegant bar-restaurant is across the street from Tired Hands’ seasonal beer garden.

The new eatery has 35 seats – making reservations a good idea – and offers an affordable menu from chef Bull Braun.

Braun decided to combine Chinese recipes and ingredients from local providers to come up with dishes such as clams and XO sauce over bucatini and mapo tofu noodle made with house-extruded rigatoni, mushroom, and tofu.

There is also the delicious dan dan noodles with Szechuan chicken liver sauce and only one dessert: a white chocolate ice cream with orange-ourison granita and “fortune cookie shatter,” as Braun calls it.

St. Oner’s is a one-stop shop for beverages. The eatery is importing nine beers from Ardmore brewery, the Awake Minds coffee that they roast, the kombucha that they brew, and the wine that they offer in barrels. The only beverages that come from elsewhere are the spirits.

The eatery is open daily from 4 p.m.

Read more about Tired Hands Brewing at The Philadelphia Inquirer by clicking here.