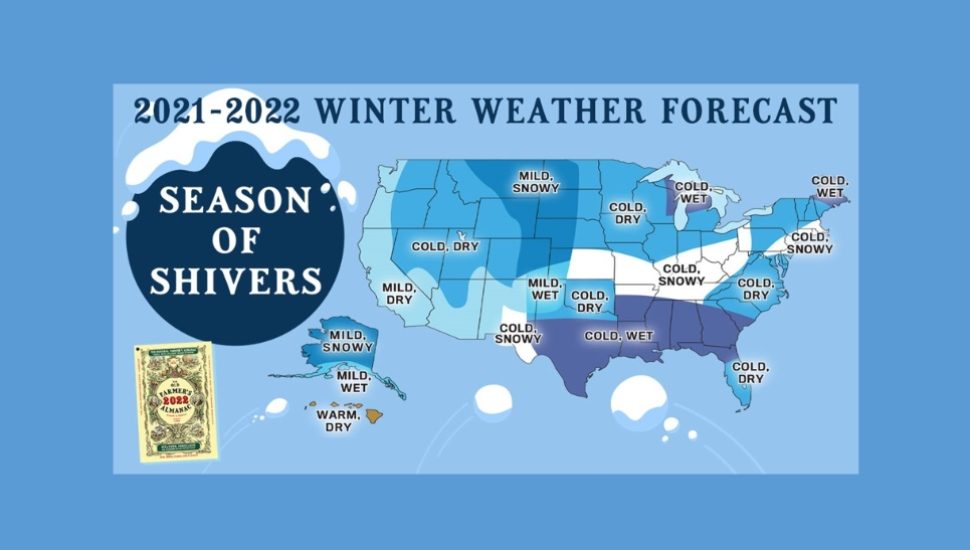 Image via The Old Farmer's Almanac.

The Old Farmer’s Almanac is predicting a trying winter for the Philadelphia region. Its prognosticators see periods of frigid temperatures accompanied by above-average snowfall. Michael Tanenbaum buttoned up the details for Philly Voice.

The 230-year-old publication released its 2021-22 winter predictions last week with a map that shows the anticipated seasonal conditions across the country.

“This coming winter could well be one of the longest and coldest that we’ve seen in years,” said Janice Stillman, the publication’s editor.

Considering that the predictions result from secret, centuries-old forecasting methods based on solar activity, climatology, and meteorology, the results might vary. But The Old Farmer’s Almanac believes the odds are in its favor. It claims about 80 percent accuracy with its predictions.

An atmospheric scientist at the University of Illinois, however, put that claim to the test by reviewing the data over a five-year period. The resulting analysis showed about a 50 percent rate in predicting both temperatures and precipitation.

Meanwhile, Popular Mechanics advises readers to use “legitimate, non-secret science out there for predicting this sort of thing” even though, realistically, “it’s impossible to predict weather with much accuracy beyond a week.”

Read more about this winter weather prediction in Philly Voice.

Check out this video on where to keep your Almanac handy!

Aqua Offers Tips to Keep Pipes from Freezing This Winter