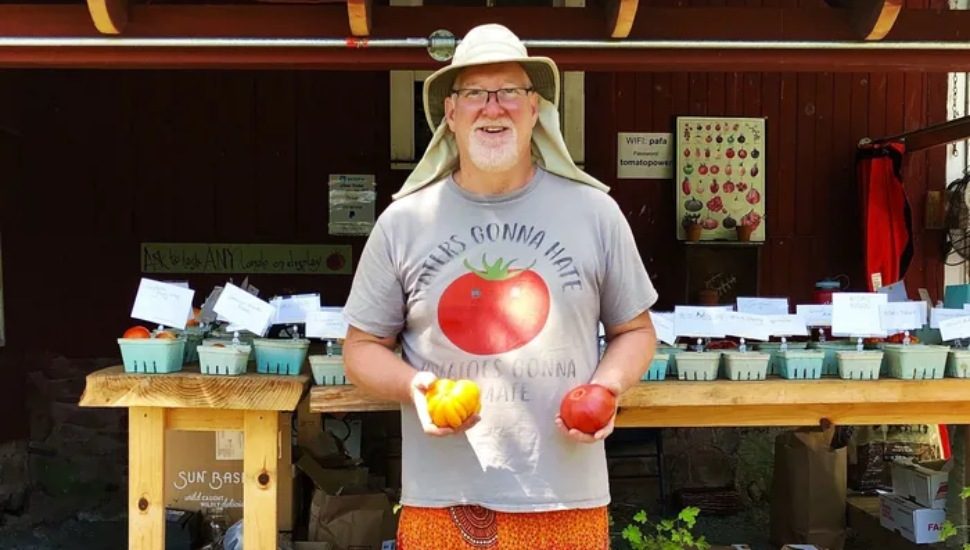 Rainbow Tomatoes Garden in East Greenville is a true paradise for heirloom tomatoes with over 300 varieties available to choose from, writes Craig LaBan for The Philadelphia Inquirer.

The farm is owned by Dan Waber, a former chef turned tomato evangelist, along with his wife Jenny Hill.

They harvest different groups of varieties every day during the season and usually sell everything that is put out for the day by 5 p.m.

”The official name for my agricultural method is ‘CRAZY,’” said Waber.

In addition to these fields of tomatoes, the pair also raise 15 ducks and several goats.

They also host occasional performances in the attached Wunderbarn, where Hill showcases her background as a circus artist.

And there is more: Weber also sells one of the largest selections of tinned fish in the world—as he puts it—even if he cannot substantiate his claim. Plus, he has chocolates!

“I put that out on the internet and the world will tell me quickly if I’m wrong,” he joked.

Read more about Rainbow Tomatoes Garden in The Philadelphia Inquirer.

Update from Farmer Dan:
Tomato season is now over for us. Because we don’t use any chemicals or plastic we are more subject to season-shortening events. We do have scratch-baked items and the largest selection of tinned seafood in the world, but as of 8/25, there are no more tomatoes for 2021. Please call to check the availability of any of Farmer Dan’s items, and they are now done with tomato season.

Al Fresco: Montco and the Main Line is Filled with Some of the Best Outdoor Dining Spots