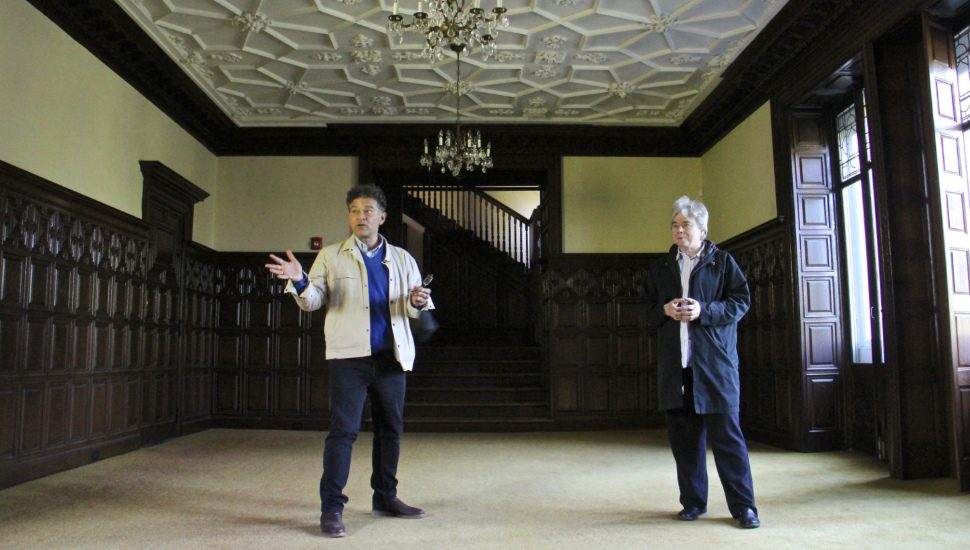 Image via Emma Lee, WHYY.
William Valerio, Director of the Woodmere Art Museum and Sister Karen Dietrich of the Sisters of St. Joseph talk in the dining room of St. Michael Hall.

St. Michael’s Hall in Chestnut Hill, home of the Sisters of St. Joseph for nearly a century that was previously an opulent estate for a string of wealthy Philadelphia families, has been put up for sale, writes Peter Crimmins for the WHYY.

The religious order that runs Chestnut Hill College has owned the 15-room mansion and its 4 acres of landscaped grounds since 1924.

Now, the sisters are hoping to find a good steward to take over the property.

“This is such a gem, and has served so well for so many years in the community, we really want to make sure that that love and legacy – the blessing that it has been – can be carried on,” said Sister Karen Dietrich, general councilor for the order.

The property with its asking price of $2.5 million has already drawn significant developer interest. However, the sisters would much rather see it go to the Woodmere Art Museum.

So they have agreed to hold off other offers until June to give William Valerio, the director of the Woodmere, a chance to raise the required funds.