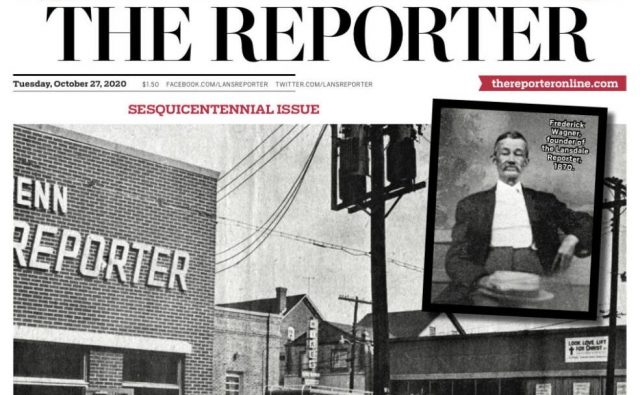 Founded in Lansdale in 1870 by German printer Frederick Wagner, The Reporter is celebrating 150 years of keeping the region populace informed on news both big and small, writes Dick Shearer for Montgomery Media.

Wagner cranked out his first edition of The Reporter on October 27, 1870. Then it was a four-page weekly paper printed on a flat-bed hand press where each letter had to be handset by Wagner.

Today, the newspaper is a seven-day-a-week regional publication serving both the North Penn Valley and beyond.

The newspaper changed ownership multiple times, especially in the early years. But still continued to grow, reaching a circulation of more than 2,000 by 1887, when it was taken over by skilled journalist and businessman H.M Woodmansee.

Fueled by advertising dollars, the newspaper reached its peak during the period between 1970-2000, reaching a daily circulation of nearly 30,000 subscribers. At that time, it averaged 44 pages a day.

The Reporter was acquired by Gannett in 1980, ending more than a century of private ownership.

Today, the paper is owned by MediaNews Group and continues to cover local and regional news with its award-winning news team.

Read more about The Reporter at Montgomery Media by clicking here.

LansdaleYou Do Not Have to Go Far to Enjoy Some of Region’s Best Corn MazesNovember 1, 2020
Tags: Frederick Wagner, Gannett, H.M Woodmansee, MediaNews Group, The Reporter