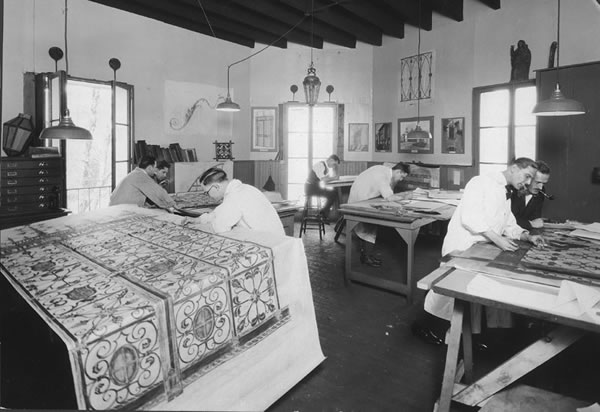 Samuel Yellin, one of Philadelphia’s most skilled iron craftsmen, transformed an 1896 home built by John O. Foering, a Civil War veteran, in Wynnewood into a fantastic Medieval-style fortress, writes for the Hidden City.

Yellin became one of the most sought after creators of architectural ironwork in the nation by the 1920s. In his work, he often collaborated with the architects Mellor, Meigs & Howe, whose work verged on the fantastic and whimsical at times.

He hired the same firm to help transfigure the home on Lancaster Pike in Wynnewood he had purchased. When they began work on the home in 1924, they gave it a completely new personality. What was once an American Foursquare turned became a Medieval fortress with nine-foot walls.

Inside, the home was filled with examples of Yellin’s art. The feature he was most proud of was the walled terrace. He described this as “strongly suggestive of effects not unusual in Spain, Italy, and other warmer European climates, all to be of tasteful and decorative character.”

After his death, the home was first transformed into a commercial property before it was demolished in the 1980s to make way for an auto-oriented commercial strip.

Read more about Samuel Yellin at the Hidden City by clicking here.

DesignAbington-based Wallpaper Whiz Offers Tips on How to Make it PopJuly 2, 2021

DesignWallpaper, Once the Old Fogey of Interior Design, is Back en Vogue, Says Local StudioJune 22, 2021