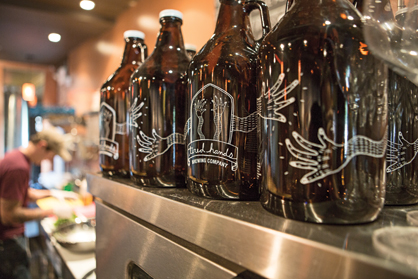 Founded in 2011, Tired Hands' main location is its fermentaria and restaurant in Ardmore. The brewery also has a cafe and general store in the suburban town.(MONTCO.Today file photo)

Craft breweries are raising a glass to the Republicans’ new tax overhaul: It cuts the excise tax on beer. There are more than a half dozen craft breweries in Montgomery County alone.

Retailers, long saddled with heavy tax bills, will get relief. So will some high-profile names in corporate finance, led by Wells Fargo.

The tax measure that President Donald Trump signed into law Friday distributes benefits across a range of American industries, from construction to health care, writes Paul Wiseman in The Times Herald.

“As a general rule of thumb, everybody’s doing well under this bill,” Martin Sullivan, chief economist at Tax Analysts, says of U.S. companies. “When you give out a trillion in tax breaks, it’s hard to create a lot of losers.”

No wonder the stock market has been roaring in anticipation of fatter after-tax corporate profits. The new law slashes the corporate tax rate to 21 percent from 35 percent. It applies a low one-time tax to the profits that corporations have long kept overseas to avoid paying taxes under the current higher rate.

It also delivers a windfall to people who pay personal taxes on business earnings. It lets companies immediately write off the full cost of new equipment. And it showers goodies on some individual industries, such as craft brewers, distilleries and wineries.

The reasoning behind shrinking the tax burdens of corporations is to free up money for companies to invest in buildings, equipment and people and thereby juice the economy — and, in turn, benefit workers. Yet mainstream economists have expressed mainly doubts that workers will benefit much from corporations’ lower tax burdens.