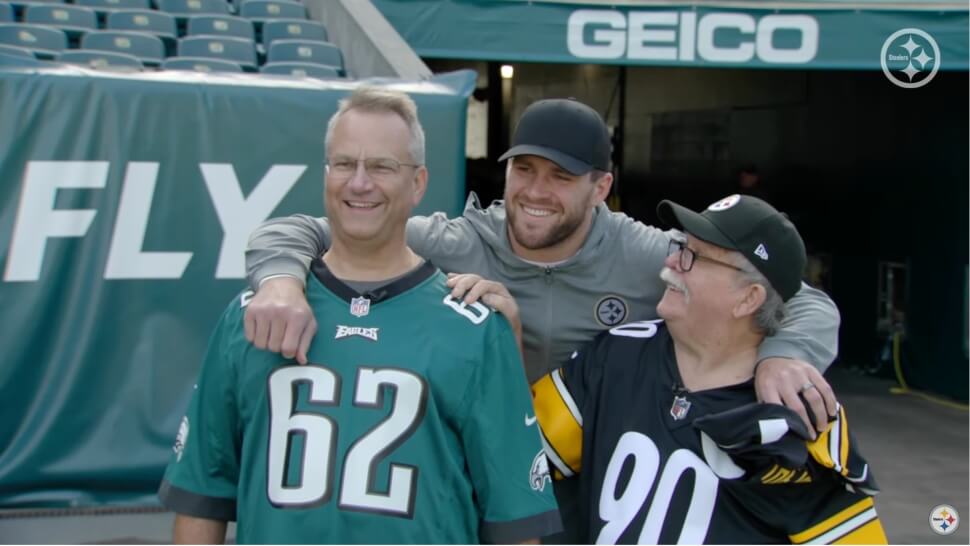 Despite loving all of his Philadelphia sports teams, Yardley resident Bill Soloway is quick to admit that his heart is with the Pittsburgh Steelers, writes Teresa Varley for Steelers.com.

About a decade ago, Soloway received a life-changing diagnosis. He was suffering from Hypertrophic cardiomyopathy. His only hope was a heart transplant, but he knew the odds were stacked against him.

However, within just 90 days, he got news that he was about to receive a life-saving transplant. After the surgery and recovery, he wanted to thank the family.

He met Jim Zimmerman, of Pittsburgh, whose son James Zimmerman Jr. was his heart donor. The two formed an immediate bond. When they started talking about their love of sports, Soloway saw how passionate Zimmerman was about the Steelers, and he soon discovered that the older man had never been to a game.

The two men have been great friends ever since.

Jim Zimmerman Sr. got the surprise of a lifetime when T.J. Watt delivered the news that he’s the winner of the 2022 Steelers Fan of the Year, an award he was nominated for by his friend and Eagles fan, Bill Soloway.

Funding for 22.5 Tons of Food, Raised by the VFTCB, Will Go a Long Way to Easing Local Hunger Pangs