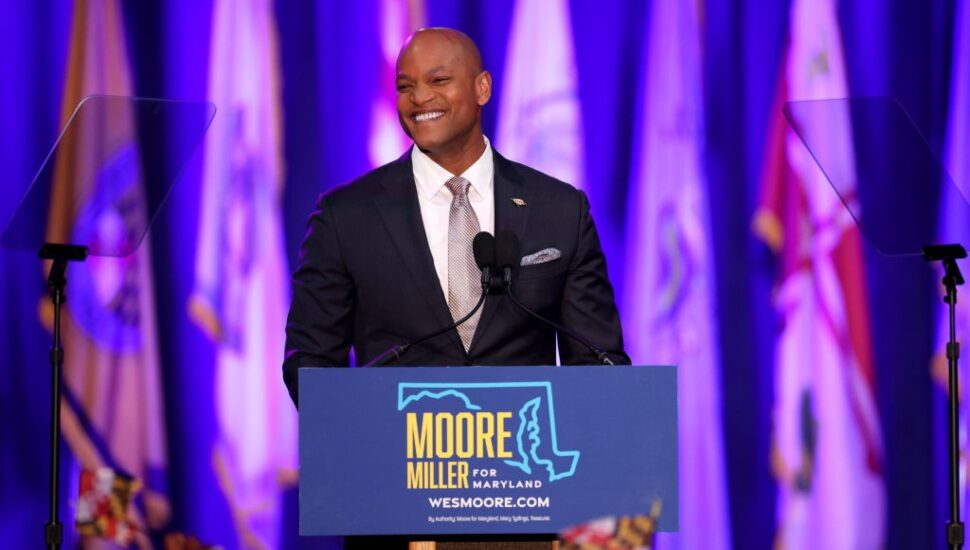 After graduating in 1998, he was commissioned as a 2nd Lt in the US Army.

“During his time here at VFMAC, Mr. Moore exemplified what it means to be a leader,” said Col Stuart B. Helgeson, USMCR (Ret), president, Valley Forge Military Academy & College. “He embraced the Five Cornerstones on which a VFMAC education is based and lived into them then and now.”

“When I entered the school, I was very angry. … I felt very alone” recalled Moore.

His father had died a decade earlier and he and his two sisters ended up living with his mother and maternal grandparents in the Bronx.

His mother had enrolled him in a private school, Riverdale Country School. Moore struggled to find a sense of belonging in the overwhelmingly white school.  He got Cs, lacked motivation, and was known as a prankster.

Then he got picked up by a police officer in the Bronx for spraying graffiti on the outside wall of a bar.

Moore’s mother had had enough. She learned about Valley Forge Military Academy from a family friend who had raved about what the discipline had done for her son, Trent wrote.

“I was determined that I would not lose him to the streets,” she said.

Between 1991 and 1998, Moore changed from a miserable middle school plebe to an admired first captain in command of the 800 cadets at the academy and junior college, Trent wrote.

“It was the first time I experienced that, where you had to go earn everything,” he said. “Nothing’s going to be given to you.”

To move up the ranks at Valley Forge, cadets were expected to show consistency in their habits, work ethic, attitude and behavior toward others. Moore excelled at steadiness, Trent wrote.

He was captain of the basketball team, played football, ran track and wrestled, worked as editor-in-chief of the campus newspaper, served three times as class president and was a regular presence on the dean’s list.

Following graduation from Valley Forge, he went on to earn a bachelor’s degree at Johns Hopkins University.

His list of accomplishments just grew from there. He became a Rhodes Scholar, White House fellow, investment banker and author, Army paratrooper and captain with the 82nd Airborne Division in Afghanistan, and was chief executive officer for the Robin Hood Foundation, a poverty-fighting nonprofit.

He capped it all by winning Maryland’s Democratic gubernatorial nomination earlier this year, and now, the governorship.

“Mr. Moore is yet another example of VFMAC alumni who go on to lead in a global society,” said Col Helgeson. “In an extraordinary career, he has demonstrated the very leadership skills instilled in all VFMAC Cadets. We are very proud of his achievements and are thrilled to support him in this latest role, confident he will continue to define what it is to have an education from VFMAC.”

Westley Moore succeeds Maryland Governor Larry Hogan and will be inaugurated in January.

Established in 1928, VFMA is a college preparatory school for boys in grades 7-12.

Its mission is to educate Cadets within an academic and military environment to be fully prepared for their responsibilities as citizen leaders who are mentally alert, sound of body, considerate of others, and possess the highest sense of duty, honor, loyalty, and courage.