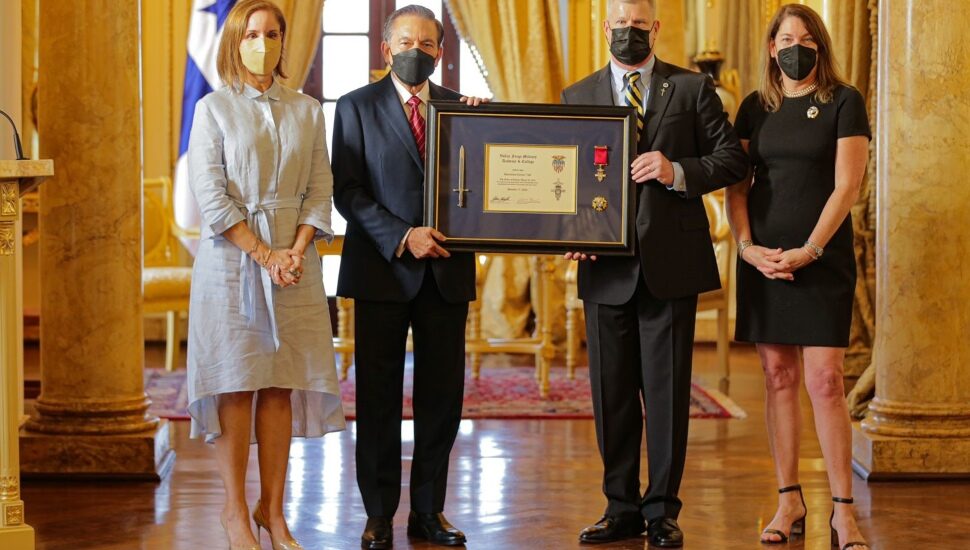 Col. Helgeson led the contingent of alumni to the Central American nation as part of an engagement tour to reconnect with the approximately 90 VFMAC graduates who now call Panama home.

“We know that graduates of VFMAC go far because educating and developing society’s leaders is what we do,” said Col. Helgeson. “It is a privilege to meet President Laurentino Cortizo-Cohen who in part credits his VFMC education for establishing in him the characteristics necessary to lead his nation.”

As part of the reception, President Laurentino Cortizo-Cohen was presented with the Order of Anthony Wayne, the highest honor presented by VFMAC to those who demonstrate exceptional public service nationally or internationally.

“It is an honor to receive the Order of Anthony Wayne,” said President Laurentino Cortizo-Cohen. “To become part of the small group to whom this honor is bestowed is humbling. I am proud of my education at VFMC and proud that the institution continues to educate young men and women who become those who lead a global society.”

General Anthony Wayne was known for military courage and success against great odds during the Revolutionary War, his aggressiveness in battle earning him the nickname “Mad Anthony” Wayne.

About Valley Forge Academy and College

Founded in 1928, Valley Forge Military Academy and College is a private not-for-profit institution in Wayne. The Academy is a college preparatory school for students grades 7-12.

Find out more about Valley Forge Military Academy and College.

See the palace visit in this video along with remarks from Panamanian President Laurentino Cortizo-Cohen.