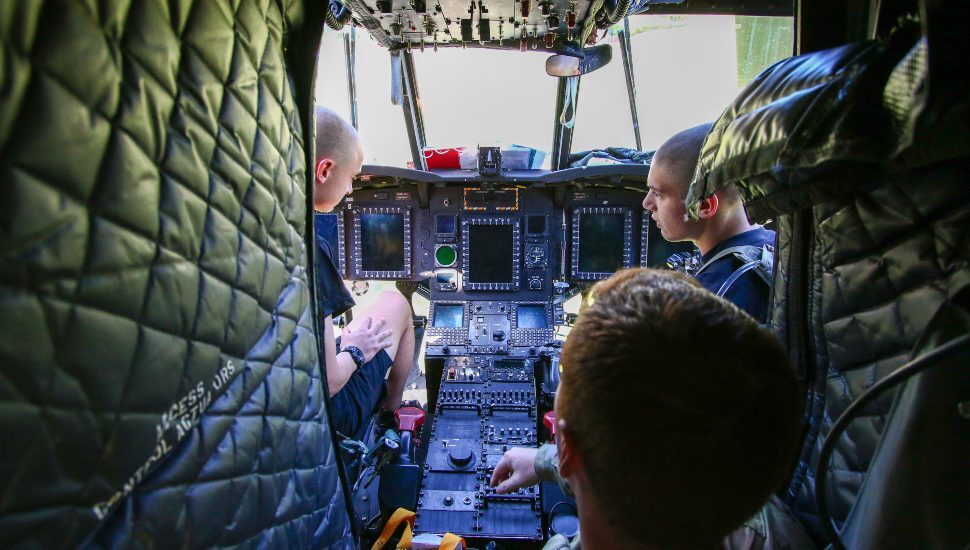 Image via Valley Forge Military Academy and College
Cadets check out the interior of a helicopter.

Valley Forge Military College is the direct beneficiary of a Pennsylvania Military Academy Assistance Program (PMAAP) Program Bill approved in the Pa. General Assembly that now moves to the desk of Gov.Tom Wolf for signature.

“This program is based on current educational assistance programs [that] have been successful in allowing individuals interested in military service to obtain top-notch education while pursuing a path toward serving our country,” Mensch said. “Most important, the cost of this program can be absorbed by the Pennsylvania Department of Military and Veterans Affairs, so there is no added cost on the taxpayers.”

Those accepted to the program will earn their Associate’s degree in any one of 10 competitive majors at VFMC concurrent with training in VFMC’s Early Commissioning Program (ECP).

At graduation, they will commission as officers in the Pennsylvania Army National Guard and then matriculate to one of Pennsylvania’s state universities. All tuition is included in the PMAAP and room and board is provided by VFMC.

“This is welcome news for those who seek a VFMC education and enables those planning to serve in the Pennsylvania National Guard to receive the financial support they need to do so,” said Colonel Stuart B. Helgeson, USMCR, (Ret), president of Valley Forge Military Academy & College. “Further, it recruits hometown talent and keeps them in service right here in Pennsylvania.”

Historically, 70 percent of those commissioning in Pennsylvania leave the Commonwealth to complete their service elsewhere. Upon graduation from VFMC, the candidate would have an obligation to serve eight years as a commissioned officer.

Bill 1194 has passed both houses of the General Assembly and is expected to be signed by Gov.Tom Wolfe in the near future.