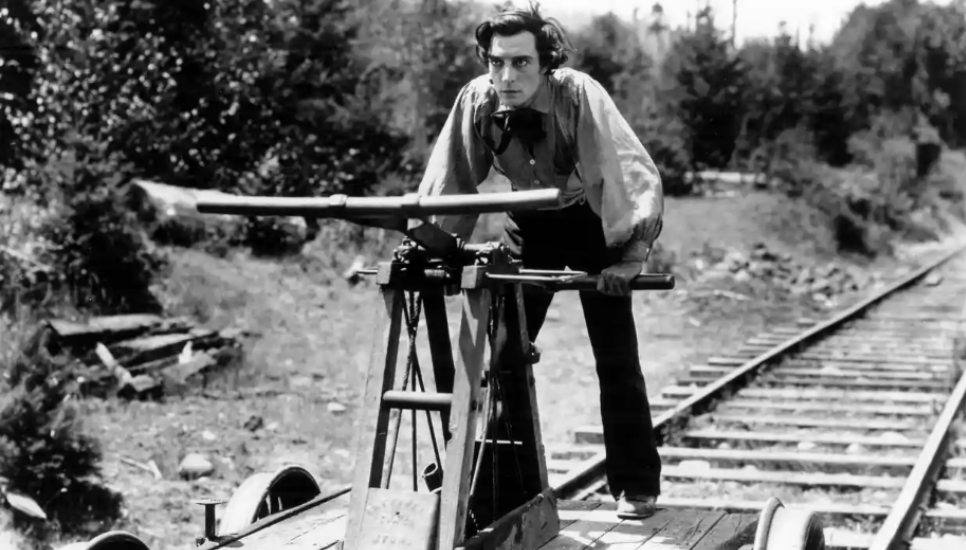 Image via ITV/Rex Features at The Guardian.
The forebears to today's railbikes are these handcars, a silent movie comedic staple in the 1920s; today's versions are much more comfortable — and considerably less comedic.

The current autumn weather in Montgomery County is ideal for seeing local foliage on foot (walking), on two wheels (biking), and on four wheels (driving). But that latter mode has a compelling variation called railbiking. Fatherly, an onsite resource for dads, highlighted that experience and recommended a local place to enjoy it.

Railbiking is almost self-explanatory: It uses large-scale pedal “cars” on vacant railroad tracks to enable riders to glide quietly through a landscape that is otherwise inaccessible except by train.

The pastime is quite old, according to Fatherly. Railbikes evolved from a 19th century on-track German vehicle — the drasine.

Much like a handcar (those pump-powered vehicles on which silent-film heroes rescued hapless maidens tied to the tracks in silent movies), the draline was used by rail-maintenance personnel, transporting workers easily between trouble spots.

Their speed is up to the fortitude of the passengers, but according to Fatherly, a family of four can easily reach 15 miles per hour.

The local spot to hop aboard one is in Pottstown.

The Colebrookdale Railroad’s version — one of only nine recommended U.S. railbiking sites — is the “Secret Valley Exporers,” reflecting a former name of the general area.

It is a four-mile round trip, and the steel rails make pedaling relatively easy (although there are height and weight restrictions).

The list of nationwide recommendations is at Fatherly; info on the Colebrookdale Railroad version is on its website.

Railbiking on a “Secret Valley Explorer” at the Colebrookdale Railroad in Pottstown.