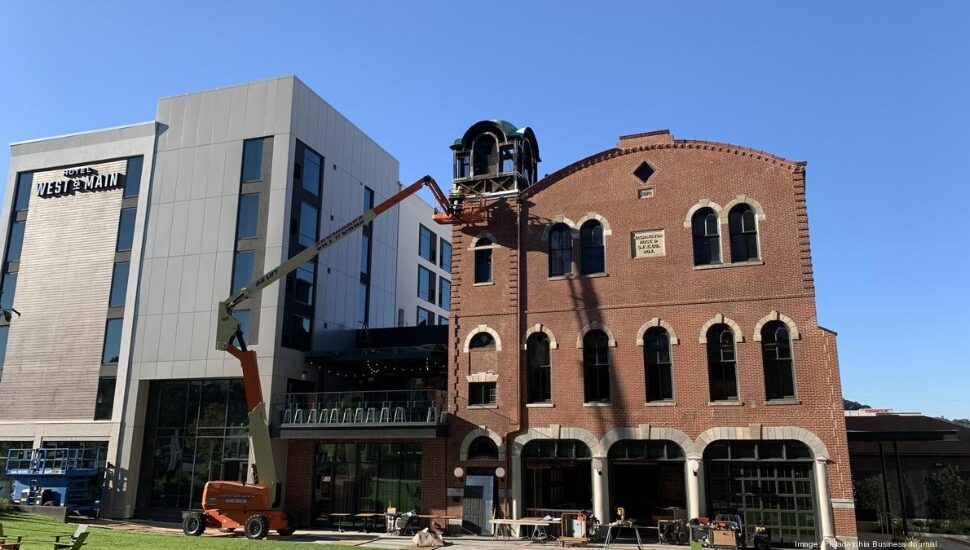 Along a popular corridor in Conshohocken sits the mixed-use Hotel West & Main, set to make its grand opening October 13. This $59-million project unites SORA West — a multifaceted development spearheaded by Keystone Development & Investment — with a green-space connection to the one-million-sq.-ft. AmerisourceBergen campus. Ryan Mulligan rang the bell in reporting the project for the Philadelphia Business Journal.

The hotel is the final rung in a ladder of projects that business leaders hope will change the game for Conshohocken’s real estate reputation. This upscale lodge incorporates the renovated Washington Fire Co. Station.

Its lobby café, 1874 Social, derives its namesake from the year the firehouse was established. With an entrance to the shared open turf, this all-day service gives diners the option to sip on their brew indoor or al-fresco.

Hook and Ladder Sky Bar & Kitchen is on the second floor of this six-story building that connects the old with the new. The 184-seat eatery houses Chief sushi chef Zack Wannawong who previously dished up his The Boathouse and Olde Bar.

It’s meant to be a “hybrid” space, not just for tourists but for the community as well.

“It’s not meant to be just some hotel that you pass by. You don’t go into a hotel when you live in the area,” said Rich Gottlieb, Keystone Development & Investment chief operating officer. “This is not meant to be that. This is someplace you’re going to want to come to have a drink, have a meal and we expect a lot of people to do that.”

Full details on the mixed-use space Hotel West & Main are at the Philadelphia Business Journal.

Moving Beyond Struggle and Surviving, Two Royersford and Conshohocken Restaurants Focus on Customers and Hospitality Amid Pandemic

Conshohocken Building Boom Not Showing Signs of Slowing Down