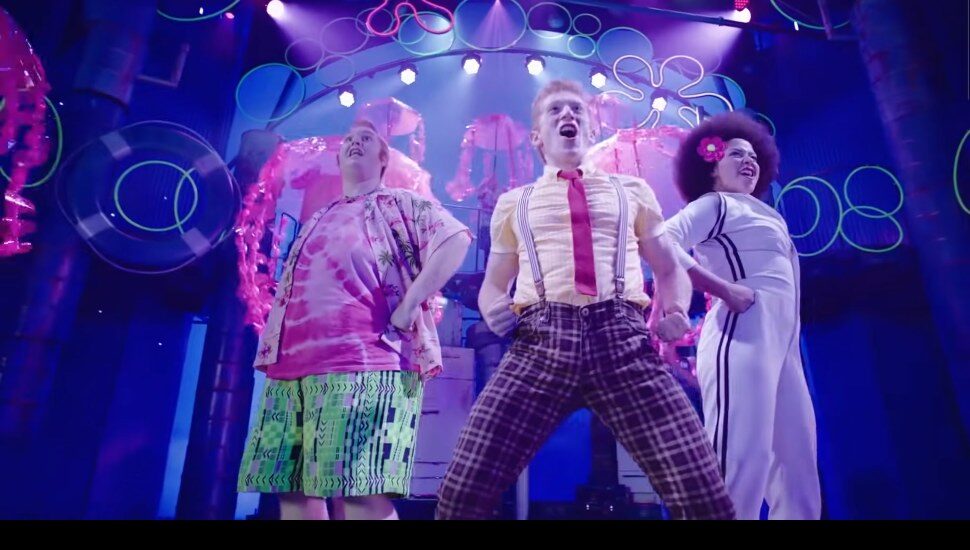 Image via Broadway.com at YouTube.
The NY cast of SpongeBob SquarePants: The Broadway Musical.

Any cartoon aficionado will associate SpongeBob with his trademark theme song and its lusty call-and-answer refrain. But in fact, that tune is not the only one in his repertoire. The squishy star and his undersea friends have had their story extended into a full-bore, professionally staged musical. A local production opens Aug. 19 for a three-day run at the Steel River Playhouse in Pottstown, as promoted by the Valley Forge Tourism & Convention Board.

The plot of SpongeBob SquarePants: The Broadway Musical — and yes, it holds water — has the Bikini Bottom residents facing the threat of annihilation from an undersea volcano.

Can SpongeBob’s eternal optimism save the day?

The musical — based on the beloved animated series created by Stephen Hillenburg — has had something of an upstream swim in finding its audience. It was created in conjunction with its television airer, Nickelodeon, and opened for previews in 2016 in Chicago.

By 2017, however, it found smooth sailing. It finally transferred to Broadway, where it received 12 Tony Award nominations. At its 2018 closure, it had logged nearly 350 performances.

It is being presented by Steel River’s Summer Bridge students. The cast, therefore, ranges in age from 13–21 and comprises all genders, races, and physical silhouettes.

“In addition, tuition assistance is available. No student has ever been turned away because they could not afford to participate in our programming.”

The run’s details are as follows:

Tickets range $20–$25 and can be purchased online.

The Aug. 21 2:00 p.m. performance is followed by a fundraising event at The Carousel at Pottstown. Riders may pay what they wish to spin on its intricately carved vintage figures, with $5 per person ($10 per family) suggested. Onsite raffles and food will also be available.

The Magic of Matilda Comes to Pottstown's Steel River Playhouse