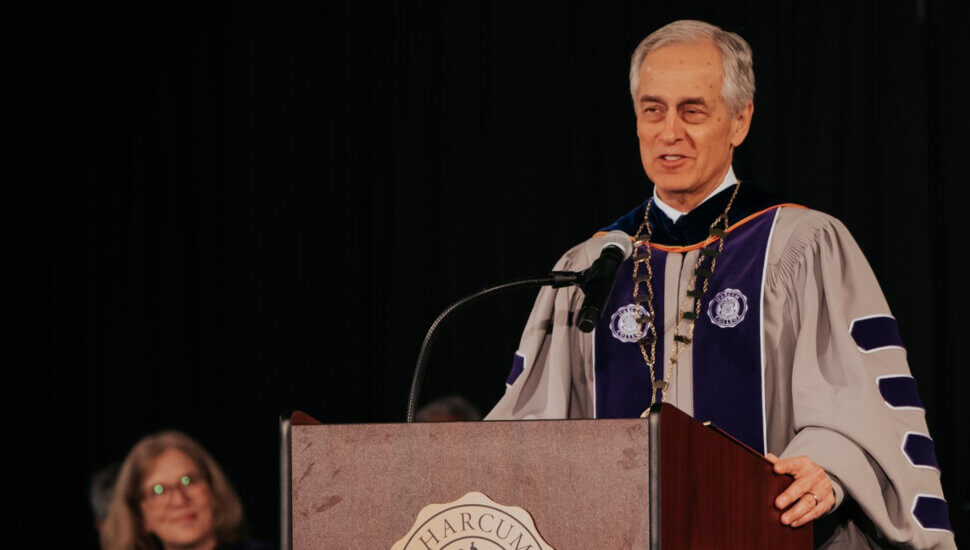 Dr. Jon Jay DeTemple, the President of Harcum College, spoke with MONTCO Today about growing up in government housing near Binghamton, N.Y.; his fondest memories of his blue-collar upbringing; playing multiple sports in high school; using football as a vehicle to attend Cornell; and giving up the sport in between his sophomore and junior years because he had found the “world’s greatest job.”

Dr. DeTemple also discussed how he landed at Harcum College; what his current priorities are as President; and how he spends much of his free time supporting the college’s remarkable athletic teams, particularly its nationally ranked men’s basketball squad.

Where were you born, and where did you grow up, Jon Jay?

I was born in 1943, the oldest of three children in Sidney, a few miles east of Binghamton in Upstate New York. We lived in what was then government housing until my parents bought their first house when I was a sophomore in high school.

What did your parents do?

My parents both worked in the magneto factory in town. My father was a toolmaker, and my mother was an assembly line worker.

What memories do you have of growing up in Sidney?

It was great! Everyone took care of each other, and all of us kids were accountable to our parents and every adult.

There were a lot of kids who lived in the same complex as we did. Most days, I was out the door to play with my friends. There was always a game going on.

I had great teachers in school. There were a lot of engineers who worked at the factory where my parents worked. The wives of the engineers often ended up being our teachers.

My high school has an active alumni association. I go back for my high school reunion weekend nearly every year.

What jobs did you have growing up?

I was a paperboy for the Binghamton Press. I also cut grass in the summer and shoveled snow in the winter.

In my senior year, I was a milkman delivering bottled milk to houses in Sidney six days a week.

Did you play any sports growing up?

I played football, basketball, and baseball. Of the three sports, football was my favorite. I was the quarterback. My coach used football to get me into college. Several schools, including Cornell, Colgate, and RPI, recruited me.

What life lessons did you take from your experience on the football field?

I don’t know where the sense comes from; I’ve always wanted to run something. It just felt like something I was supposed to do. I was elected class president in 9th grade and every year after that. I always had opportunities to lead.

What did your peers see in you?

It’s hard to say. I’m not a loud or overbearing person. I tried to always consider everyone in any decision I made. Some people, when they get to the top spot, get wrapped up in the trappings of leadership and fail at some point. I don’t care about any of that. I know everybody and try to keep everyone’s needs in mind whenever I make a decision.

What kind of music were you listening to in high school and college, Jon Jay?

I like a lot of music. It lifts me up and inspires me. I followed big bands and folk music when I was in high school. One time while I was in London working for Pan Am, I heard the Beatles playing an early version of “I Saw Her Standing There” at a bar on Trafalgar Square. When the iPod came along, I enjoyed making my own playlists.

Where did you end up going to college?

I wasn’t sure what I wanted to be. My high school guidance counselor suggested I study chemical engineering since I was good at math. I considered becoming a doctor as well. Cornell just seemed like the best school and the best choice for me.

I studied engineering for the first year, but it didn’t do anything for me. I figured out I had to get into business school because I wanted to lead. Cornel didn’t have a business school, but they did have an excellent hotel and hospitality program. I switched over and graduated with a degree in business and hotel management three years later.

Did you play football in college?

I played football for my first two years at Cornell. The summer between my Sophomore and Junior years, I took a job as a junior flight steward for Pan Am Airlines. Every year Pan Am would take 15 Cornell students, give them a crash course in being a flight attendant and then put them on flights all over the world – and pay them too! It was the world’s greatest job. I couldn’t do that job and be back for Fall football practice, so I gave up football for the Pan Am experience.

Looking back, was Cornell a good choice for you?

It was. I did well in class and joined a fraternity, but I wouldn’t call it the high point of my life.

After college, who were the people who saw promise in you and opened doors for you?

I’m not being egotistical, but I have had to make my own way. I didn’t have people helping me along the way. It hasn’t always been easy, but I’ve been very fortunate. No one opened doors for me; instead, I was always trying new things.

What was the wildest thing you tried?

I tried health clubs in 1987 before there was a health club industry. It’s not a good business to be in! The formula for success in that industry is to get people to sign up to be members of the club and deduct their monthly membership fee from their checking account. Then you hope they don’t use the club or their membership! We did it differently. We had so many programs to draw members in they couldn’t wait to get to our club! Our expenses were too high, and we couldn’t charge more for our memberships, so we were stuck!

How did you get to Harcum College?

I was the president of Teikyo Post University in Waterbury, Connecticut. I started as the CFO but moved into the president role after the president left five months after I joined. The University was controlled by a group in Japan that ran the school for several years. Eventually, they divested it to a group from Philadelphia. I stayed on as president for a year but left when my leadership style didn’t mesh with the new owners.

A headhunter reached out to me about the Harcum opening. I had been to Philadelphia before and hadn’t been impressed; the city seemed run down to me. However, everything had changed when I came back to interview for the position at Harcum. I liked that Philadelphia had four major sports teams, I enjoyed the enthusiasm and passion of Philadelphia sports fans, and I fell in love with Wawa!

Coming out of the Pandemic, what are your current priorities at Harcum College?

My top priority is to get enrollment back up. We’re not a grant-funded institution; we rely on tuition to pay our bills. The Pandemic hurt us. When I came here in 2007, the college was struggling.

I revamped several departments, including financial aid, and got the college back on its feet. Before the Pandemic, we were doing quite well. Post-Pandemic, however, we’re back to figuring out how we get more students into our classrooms.

We have several Partnership Sites in underserved communities that bring our allied health programs to students who might not otherwise have a shot at a college degree. The programs are priced differently, and the barriers of finding transportation to our Main Line campus are removed. P

lus, our partners provide supplemental services like day-care and counseling services. Our programs are designed to lift people up. I’m a big believer in education being a great equalizer in our society.

I interview everyone we hire. I want to talk to potential hires about our culture, who we are, and what they’re getting into when they work at Harcum. We want to make our students successful by removing the barriers in their way. I want to make sure they’re that kind of person. Our teachers and employees give 110% to serve our students.

What do you do with your free time, Jon Jay?

I love my job! I love sports and enjoy going to our basketball games. I don’t sit in the stands like everyone else. Instead, I stand at the same place at the end of the court so I can talk to people and players coming in the door. Win or lose, I shake all the players’ hands. Former players and their parents stand and talk to me before and after a game.

Our sports teams are remarkable. We take kids with exceptional athletic skills who have never done well in the classroom. We’re tough on them. We insist they attend classes and provide study halls and tutors and teach them how to succeed in the classroom. Because our basketball team does so well – we’ve never had an under 20 win season, four-year college coaches recruit our kids to play for them after they finish two years at Harcum. This year all five starters on our men’s basketball team with a 32-3 record won scholarships at Division 1 four-year programs.

Do you read much?

When I was pursuing my leadership doctorate, I read everything I could about leadership, including about Sitting Bull and his strategy at Little Big Horn. There’s no one formula for leadership. Some leadership styles are good in one situation and not good in another. Leaders are not born, but they have to have specific attributes to be good leader. Those attributes need to be nurtured and developed over time.

During the Pandemic, I discovered Audible and listened to a book on Audible as I ran every morning. I enjoy historical novels and learning about different people and places. I listened to The Splendid and the Vile about Winston Churchill at the start of the Pandemic and am listening to Hitler’s American Gamble by Branden Simms and Charles Laderman right now.

What gives you hope, Jon Jay?

People give me hope. I believe in people and think people are intrinsically good. Nobody has a straight path. I always hope I can find my way and do better than I did yesterday.

Finally, Jon Jay, what was the best piece of advice you ever received?

Something that Winston Churchill said about never, never giving up has been the motto for my life. I have a little medal on my desk that says never give up to remind me.

Also, Dr. John Honey, who was my doctorate advisor and later my life mentor. Dr. Honey was a smart man with good values who I loved. There wasn’t one thing he said, but we would talk about what was going on in my life, and he would always give me such great advice.