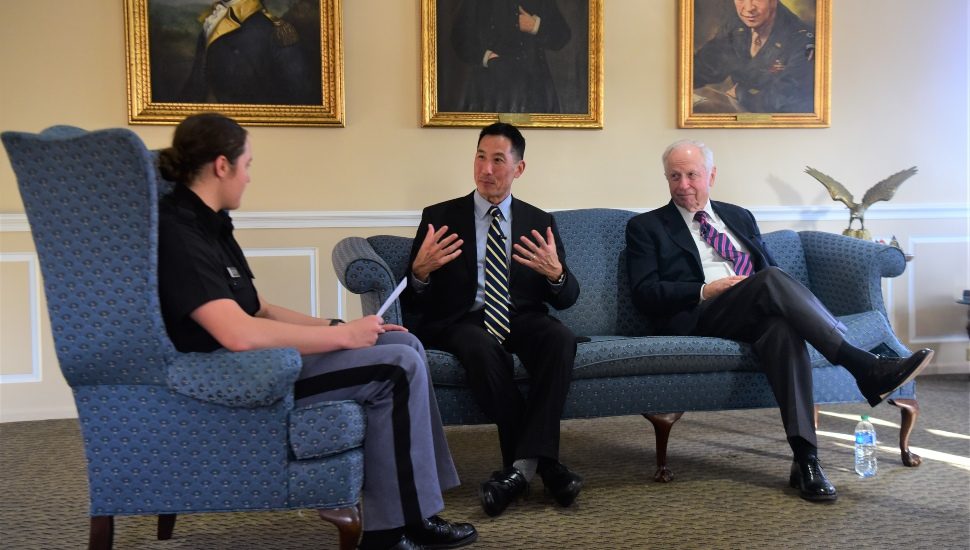 Image via Valley Forge Military Academy and College.
The Honorable Glenn English (right), US Congressman (D) Oklahoma,1975-1995 and the Honorable Charles Djou (center), US Congressman (R) Hawaii, 2010-2011 are interviewed by a Cadet (far left) of Valley Forge Military Academy and College as part of the Congress to Campus program.

With an upcoming election and a nation seemingly divided, it’s more important than ever to understand democracy and the process of government.

Valley Forge Military Academy and College conducted a two-day educational series Oct. 25-26, “Congress to Campus,” about the US democratic system, and its impact around the world.

The program is offered by the Association of Former Members of Congress. It brings former members of the US House of Representatives and the US Senate to campuses to engage with students from regional universities and high schools through lectures, discussions and debates.

VFMAC was selected to host the program because of its commitment to educating the whole student to become both citizen and military leaders of the future.

“By bringing experienced and elected members of Congress to campus, we are enabling students to learn first-hand how the democratic system works, how the procedures of lawmaking are designed, and what their roles are in being the nation’s future leaders,” Smith said.

“We are educating future leaders here,” said Paul M. Lea IV, M.S., Ph.D., dean of Valley Forge Military Academy. “Participating in open discussions with congressional leadership about the realities of government and governing, the election process, and ideals and realities in the halls of Congress can’t be replicated from a textbook.”

The Congress to Campus program is offered by the Association of Former Members of Congress, a bipartisan, nonprofit, voluntary alliance of former United States Senators and Representatives which seeks to deepen the understanding of the democratic system, domestically and internationally, and to engage the citizenry through civic education about Congress and public service.

Behind the Scenes at VFMAC, Where In-Person Instruction Continues by Virtue of Exemplary Planning