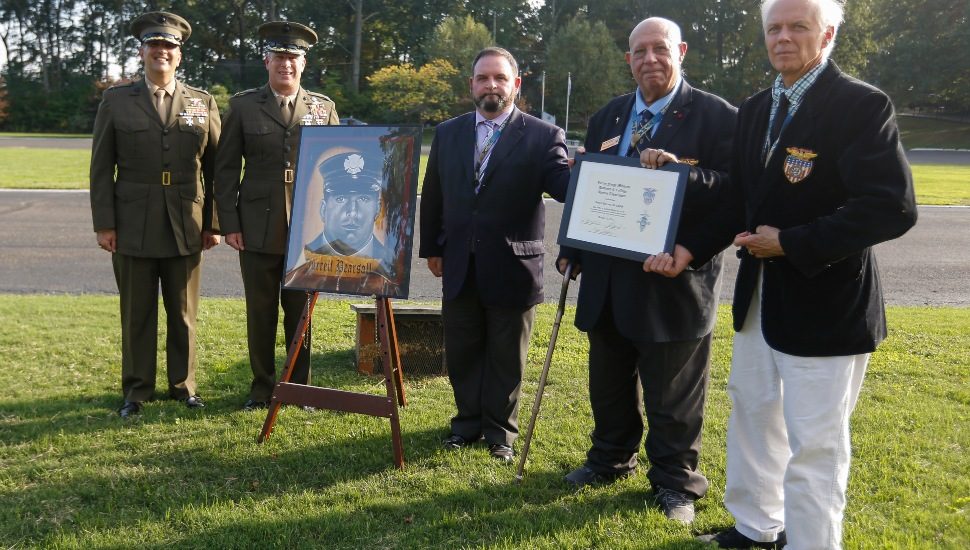 On January 18, 1929, several cadets of the Valley Forge Military Academy and College ran into the burning building that housed the school.

At great risk, they assured all their brothers escaped the inferno.

On September 11, 2001, VFMAC graduate, Durrell V. Pearsall Jr., VFMA class of ’86, ran into the burning World Trade Centers to perform the same heroic efforts as did his brothers some 72 years before.

His final human act was one of selfless allegiance to others as he stationed himself on the upper floors guiding others to safety.

Mr. Pearsall was part of the Elite Fire Rescue 4 of the Fire Department of New York and was one of 343 firefighters who gave their lives that day.

“VFMAC is where Mr. Pearsall first embraced a vow putting others before self,” said Stuart B. Helgeson, USMC (Ret), president of Valley Forge Military Academy and College.

On Friday, Oct. 15, as part of First Responders month, Mr. Pearsall received posthumously the Order of Anthony Wayne – established in 1929 to honor those cadets who entered their burning school to help others to safety.

“He is most deserving of this great honor as he lived a life exemplifying what he learned here by selflessly serving others throughout his career as a New York City firefighter,” Helgeson said at the awards ceremony.

The Order of Anthony Wayne is the highest honor presented by VFMAC to those who demonstrate exceptional public service nationally or internationally.

Quiet and unassuming, his fellow firefighters remember him as one who could command the room by just being in it.

Mr. Pearsall entered VFMA for a post graduate year, graduating in the class of 1986.

Part of C Company, his fellow cadets recall his leadership qualities, self-discipline, and most of all, a love of country.

He played football at C.W. Post, joined the FDNY in 1993 and continued playing football for the department’s team.

Proud of his Irish heritage, Mr. Pearsall played snare drum in the department’s Emerald Society Pipes and Drums and had the band’s logo tattooed on his calf.

Another tattoo – this one on his upper arm claimed “Bás roimh náire”, Gaelic for “Death Before Shame” — a pledge by which he lived and died.

The Order of Anthony Wayne will become part of the permanent collection of 9/11 memorial items housed there on the VFMAC campus in Mellon Hall.

Known for military courage and success against great odds during the Revolutionary War, his aggressiveness in battle earned him the nickname “Mad Anthony” Wayne.

About Valley For Military Academy and College

The ceremony included an appearance by the school’s Corps of Cadets marching band.