The Incredible Changes Coming to Longwood Gardens Through “Longwood Reimagined” 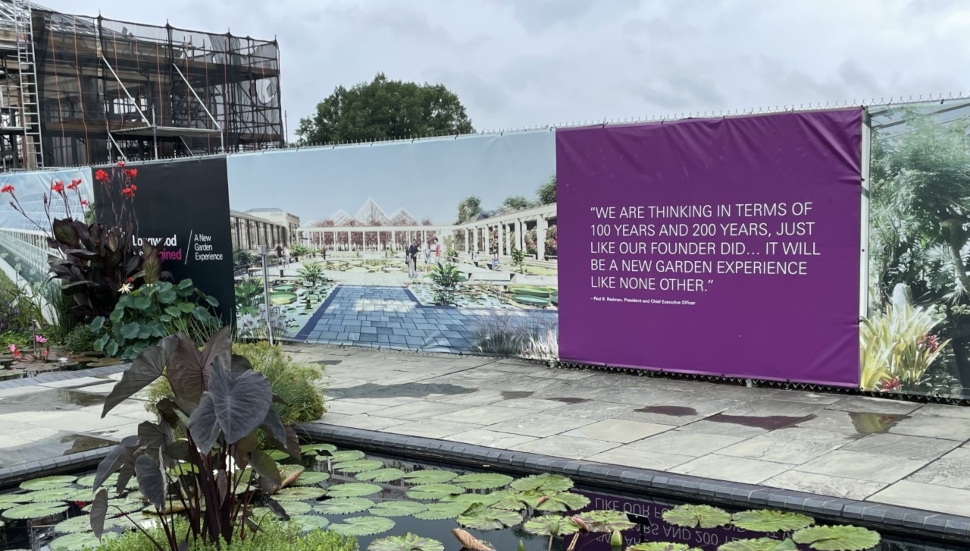 Longwood Gardens has already long been an incredible place to visit, but come 2024 it will become even more remarkable courtesy of Longwood Reimagined: A New Garden Experience.

This is a $250 million project that is expanding the gardens by 17 acres, as well as reconstructing and refurbishing other major sections to enhance them for years to come.

However, you won’t even have to wait until 2024 to start seeing the changes. Longwood Reimagined is well underway, with certain portions of the project nearing completion quicker than others.

In fact, you will begin to see the first major differences from the project as early as this fall, starting with the expanded orchid house.

In addition to being enlarged, the updated orchid house will have a new glass roof, restored bronze windows, and will allow Longwoods to showcase up to 50% more orchids than before.

Alas, as the saying goes, good things come to those who wait. And you’re going to have to be a little patient for the biggest change from the project, which is what Longwood Gardens President and CEO Paul B. Redman refers to as the “crystal palace.”

This glasshouse will be built to appear like it is floating on the pool that will surround it, and upon completion will become the all new 32,000-square-foot West Conservatory.

And inside, it will house Mediterranean-themed plant life that will be accentuated by a variety of canals and fountains designed to make the interior feel like a series of islands.

As stated, it is not just additions that are coming to the gardens, but also updates for existing longtime favorites.

This includes a reconstruction and relocation of the cascade garden, which has been part of Longwood dating back to 1993. As you can imagine, it is no easy feat to move an entire garden.

To assist with the undertaking, Longwood has enlisted the help of scholars, preservationists, and landscape architects. The end product will create a “3,800-square-foot custom-built, stand-alone jewel box” which will not only update the aesthetic but also provide functional purpose by allowing the plants additional room to grow.

Another spot that is being enhanced is the waterlily court that was created in 1989.

This already peaceful section will receive further aesthetic amenities, and will now act as a hub for reaching the aforementioned west conservatory, the relocated cascade garden, as well as the next exciting new location, the bonsai courtyard.

If you have been to the conservatory at Longwoods in the past, you will have already seen some of their beautiful bonsai specimens that were housed there.

However, the new bonsai courtyard will give them an entire outdoor area to themselves, simultaneously allowing a larger collection of them to be on display.

And it is not just the artistic areas of Longwood Gardens that are receiving an upgrade.

The administration building is receiving an expansion as well, adding classrooms, offices, and a library for the benefit of the staff and students.

Also, while Longwood already had a restaurant, a beer garden, and numerous spots to grab on-the-go food, they will have another eatery by the end of this project.

Overlooking the main fountain garden will be another restaurant for the public, and space that can be utilized for private events. With all the artistic additions coming to the gardens, visitors will very likely be spending more time on average during visits, so more options to get a bite will certainly be appreciated.

Even Longwood Gardens scenery, in general, is getting an overhaul. Given the new buildings and locations, naturally, new pathways are being added to connect it all, particularly what will be the east and west conservatory.

However, Longwoods’ staff says they want the journey around the gardens to be “cinematic”, and thus they are also adding captivating new viewpoints along the way. This includes scenes of the meadows, a promenade, and even a terrace that will take you to sycamores that have been growing for more than a century.

These are the major highlights of the entire project, but there will doubtless be many more minor changes sprinkled throughout the renovation. Titling this project Longwood Reimagined is clearly very fitting.

As Paul B. Redman said in describing the efforts, these are changes meant to endure for the next one hundred, and even two hundred, years. That is in keeping with the philosophy displayed by the founder of Longwoods, Peirce-du Pont, when he set out to make his garden. It is safe to say he succeeded, now those who took over his work continue that legacy.

For a complete breakdown of all the changes Longwood Gardens will be seeing by the end of this project in 2024, be sure to check out their official site for more information.