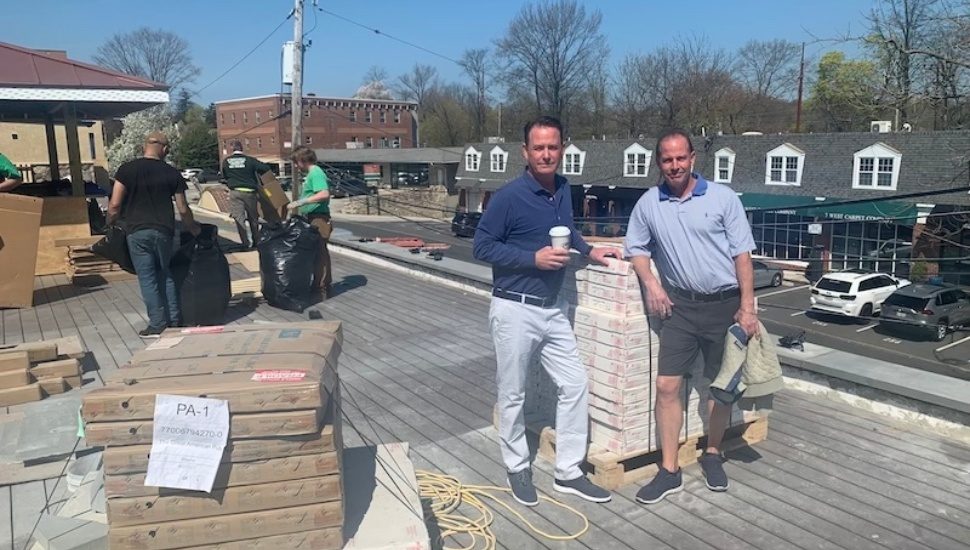 Image via savvymainline.com.
Owners Mark and Tom Hemcher on the roof of the Great American Pub in Wayne.

There’s a lot of Philadelphia coming to Wayne. DiBruno Bros. opened a branch store in the Main Line town. The Philadelphia Print Shop has moved from Chestnut Hill to new digs downtown. And now, a rooftop bar!

The bar is coming in May on top of the Great American Pub at 4 West Ave. in Wayne, writes Caroline O’Halloran for savvymainline.com.

The 3,000 square-foot establishment among the treetops is Wayne’s first. It will feature a central bar, a couch-strewn lounge, and sail-shaded tables.

Pub owners Chuck, Tom and Mark Hemcher are both from Radnor.

They’ve invested $750,000 and spent a year getting things ready. Work included shoring up the roof with steel beams, installing an elevator, roof-level restrooms, and some front stairs.

“It’s the first rooftop approved by Radnor Township,” says Mark Hemcher. “That’s why it took so long. They did everything by the book.”

The family opened its first Great American Pub in 1991 in Conshohocken, then opened a second pub in Wayne in 2000, followed by a third pub in Phoenixville in 2014.

The rooftop at The Great American Pub in Wayne will open on or around May 15.

Read more at savvymainline.com about this new rooftop bar in Wayne.