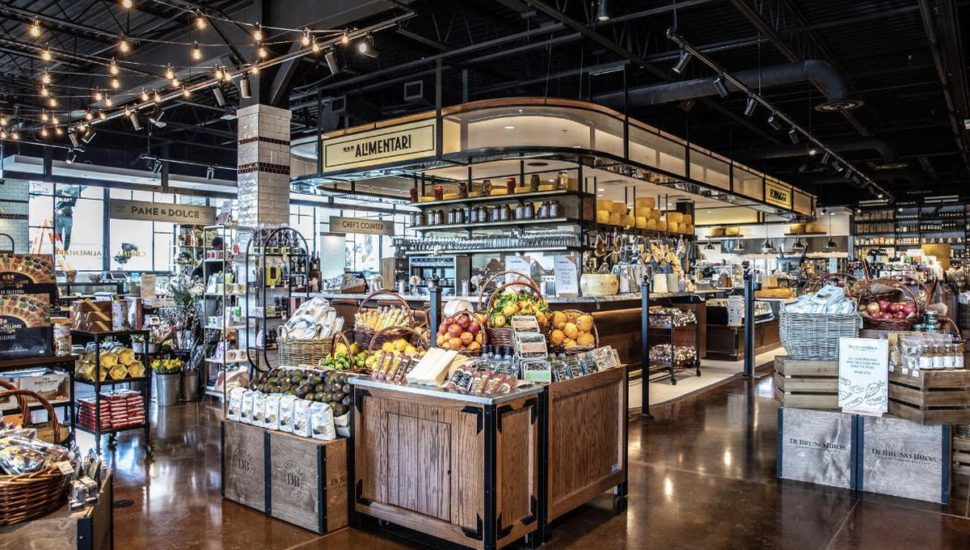 Image via the Philadelphia Inquirer.

Italian-food retailer Di Bruno Bros. continues to expand beyond its South Philly roots, opening a sixth location (its second in the suburbs) in the Strafford Shopping Center in nearby Wayne, writes Michael Klein for The Philadelphia Inquirer.

The new market is a whopping 8,000 square feet of edible excellence, set with a sunny and bright European feel. And there’s plenty of vino to go along with those meatballs and gravy; the shop has a full liquor license.

Corporate culinary director Ashley James oversees the prepared foods, including the dishes of Bar Alimentari, a scaled-down version of one of Di Bruno’s Philadelphia restaurants.

The market has a 20-foot circular bar that sells small plates of cheese, charcuterie, and antipasto. Another 20-foot bar with an open kitchen serves pizza and snacks and will also be used as an area for cooking classes and demonstrations.

The market holds a full-service coffee bar, run in collaboration with Seattle-based Caffè Umbria. It offers parfaits, pastries, and breakfast sandwiches. There are also counters for rotisserie meats and sandwiches, salami, seafood, and desserts.

Outside seating and dining will be available later this spring, while a gelato cart will debut this summer.

Read more about Di Bruno Bros. in The Philadelphia Inquirer.

Cluck Yeah! Where to Find Excellent Fried Chicken Sandwiches in the Montco Area