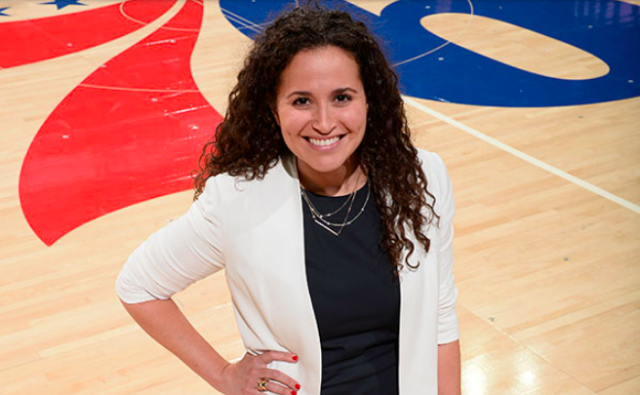 As the team’s lead marketer, Katie O’Reilly, a former point guard at Shipley School in Bryn Mawr, has been striving to weave the Philadelphia 76ers’ past into the city’s evolving landscape in ways that appeal to both new and old fans, writes David Gianatasio for the Muse by Clio.

“Our goal was to bring the history of this organization back to life, but we wanted to be effortlessly cool,” said O’Reilly.

While growing up, O’Reilly thought of Philadelphia as a more provincial place. Now, the city is going through a renaissance of art, food, culture, and fashion, among many other things.

“We asked ourselves: ‘How can we capture that and be the team for the new Philadelphia?’”

And while the team’s stars still appeal in TV commercials, O’Reilly and her in-house marketing staff go beyond these traditional appeals by making campaigns that contain easily consumable social content, abundant media coverage, and fun merchandise.

This approach has resonated hugely, helping the team top the NBA in attendance and ticket sales for the last season.

Read more about Katie O’Reilly at the Muse by Clio by clicking here.