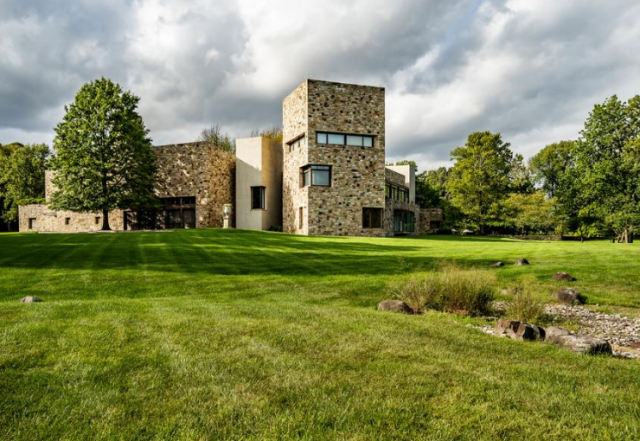 Arbor Hill, the Fort Washington estate that was once the most expensive listing in the region, is headed to auction nearly a decade after hitting the market. Image via The Philadelphia Business Journal.

Arbor Hill, the Fort Washington estate that was once the most expensive listing in the Philadelphia region, is headed to auction nearly a decade after first being put on the market, writes Ryan Sharrow for the Philadelphia Business Journal.

The nearly 37,000-square-foot mansion was designed by world-renowned architect Rafael Vinoly, whose works include the Kimmel Center for the Performing Arts.

It is owned by Dennis Alter, the former CEO of now-defunct Advanta, who built the residence 21 years ago. The cost was estimated at between $50 and $80 million.

The 70-acre property first came on the market in 2011 for $30 million and has been steadily going down in price to its current $12 million for 50 acres.

So now, the home is set to be auctioned at Concierge Auctions from October 20 to 22, with no reserve price.

The opulent residence is divided into three wings encompassing nine bedrooms and nine full and six half bathrooms. Other standout features include two formal dining rooms, an indoor basketball court, and its tower offering a 360-degree views of the property.

Read more about Arbor Hill at the Philadelphia Business Journal by clicking here.