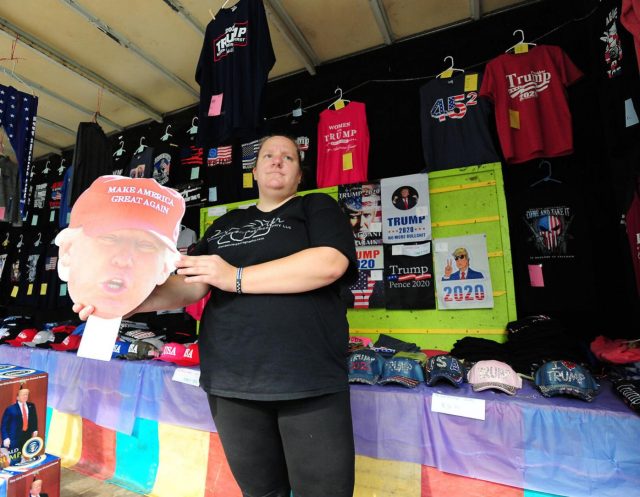 After failing to secure a space for their stand in Montgomery County, Dan and Pat Kintner then decided to pack up their Trump merchandise and head north. Image via The Citizens' Voice.

After being unable to rent a space for their stand in Montgomery County, Dan and Pat Kintner have temporarily transplanted themselves to more northern parts of the state to sell their Trump merchandise, writes Bob Kalinowski for The Citizens’ Voice.

The pair has now been selling Trump gear at stands in Wilkes-Barre Township and Drums in Luzerne County and the business has been booming, they said.

The Kintners are not associated with the Trump campaign and despite having the Trump-Pence reelection logo, none of the gear they are selling is officially licensed. But Dan Kintner is certain the campaign will not mind.

“It’s free advertising for them,” he said.

As huge Trump supporters, they also plan to write his reelection campaign a big check from the profits. And they are not shy about encouraging their customers to also vote for Trump.

“You have a lot of closet Trumpers in this area,” said Pat Kintner. “Since we’ve been out, we’re seeing Trump flags all over the place. We’re helping bring the closet Trumpers out.”

Read more about the Kintners at The Citizens’ Voice by clicking here.

Pennsylvania Most Likely to Give Decisive Vote to Either Presidential Candidate