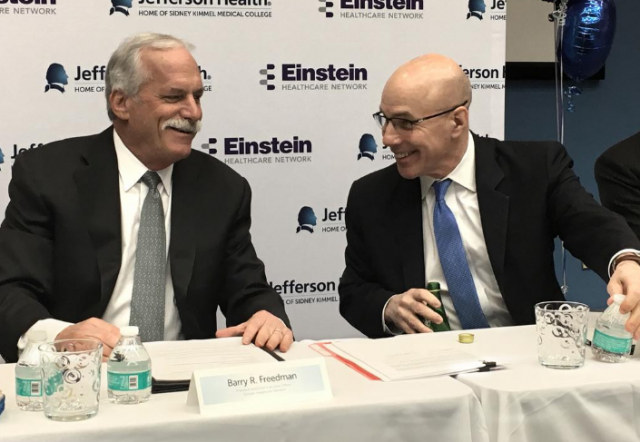 If Thomas Jefferson University can complete its acquisition of Einstein Healthcare Network, it is planning to shut the ER at Einstein’s Elkins Park campus. Image via The Philadelphia Business Journal.

A merger between Einstein Healthcare Network, which has operations in East Norriton, and Thomas Jefferson University that might save the already struggling Einstein has been put on hold until both sides present their witnesses in front of a federal judge, writes Alan Yu for WHYY.

Hospitals in Pennsylvania have received $2.8 billion collectively from the COVID-19 federal relief fund, but have lost $5 billion since the start of the pandemic.

Einstein Healthcare Network received $118 million; however, due to loss of profit over the last three years, even with the aide package, the hospital is struggling to sustain its facilities and had to furlough a percentage of its workers.

Serving low-income patients and patients who rely on government programs such as Medicaid and Medicare in the North Philadelphia area, Einstein reports that its North Philadelphia location is at risk of shutting down the whole Einstein system unless it merges with Jefferson.

The Pennsylvania Attorney General and the Federal Trade Commission, worried the merger might result in less powerful players and in turn lead to less competition in the field, have blocked the merger until a federal judge presides over the case.

Read more about the merger between Einstein Healthcare and Thomas Jefferson University here.

HealthcareSeptember 15th COVID-19 Update: Over 450 New Cases Reported in Montco; 94% of Cases are Among Unvaccinated PennsylvaniansSeptember 16, 2021