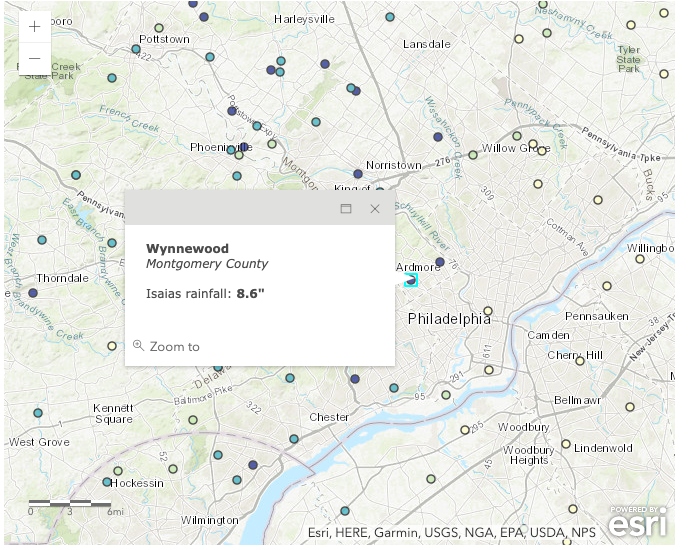 Wynnewood received the highest amount of rain it the region from Isaias, most of which found its way to Philadelphia through the interconnected local waterways. Image via Philadelphia Inquirer.

Wynnewood received the highest amount of rain it the region – 8.59 inches – from Tropical Storm Isaias, most of which found its way to Philadelphia through the interconnected local waterways, writes Frank Kummer for The Philadelphia Inquirer.

Stormwater from Wynnewood made its way into Cobbs Creek watershed and from there to Darby Creek in Philadelphia. As a result, the surrounding Lindbergh Boulevard in Eastwick had many homes flooded on Tuesday.

Wynnewood was not the only hard-hit town in Montgomery County. Skippack and Collegeville had the second-highest and third-highest rainfall totals from Isaias out of 247 locations in Pennsylvania, New Jersey, and Delaware with 8 inches each. Worcester Township had the fourth-highest rainfall total at 7.56 inches.

The 12.5-mile Green Ribbon Trail in Upper Gwynedd also suffered the consequences of the storm, as the water destroyed much of its infrastructure. According to Gail Farmer, executive director of Wissahickon Trails, the trail had to be closed.

“It’s underwater completely,” she said. “We’ve lost all of our structures, such as boardwalks, signage, stepping-stone crossings. It’s going to take a good bit of time and dollars to repair.”

Read more about Tropical Storm Isaias at The Philadelphia Inquirer by clicking here.

Priests-In-Training At St. Charles Borromeo Seminary in Wynnewood Hope To Inspire People To Put Their Trust In Clergy Again