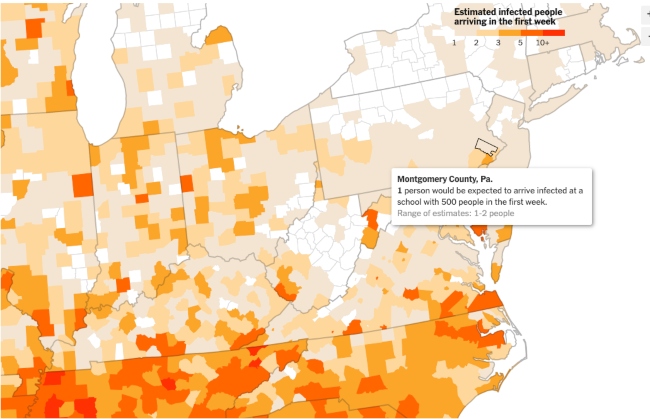 Montgomery County is among the counties nationwide with low risk in the potential of infected people arriving at school if classes started now. Image via New York Times.

Montgomery County is among the counties nationwide with low risk based on the potential of people who would be coming to school infected with the coronavirus if classes started right now, write James Glanz, Benedict Carey, and Matthew Conlen for The New York Times.

New estimates from researchers at the University of Texas at Austin showed that smaller, isolated groups of people face the lowest risk if schools were to reopen.

Small “pods” of up to ten students would not be likely to include an infected person in the first week of classes in every part of the country, including Montgomery County.

But as the number of people in schools grows, so does the risk.

In Montgomery County, estimates show that a school of 100 people would see no infections if classes were to start today, but a school of 500 would probably see one infected person.

That number increases to two for a school of 1,000.

This kind of information reflects local conditions that could play a key role in decision making by parents, teachers, administrators, and political leaders, according to experts and researchers.

Read more about the estimates at The New York Times by clicking here.