Home Archive Washington Post: A Look Back at an Overlooked Chapter of Philadelphia’s Segregation History

Washington Post: A Look Back at an Overlooked Chapter of Philadelphia’s Segregation History 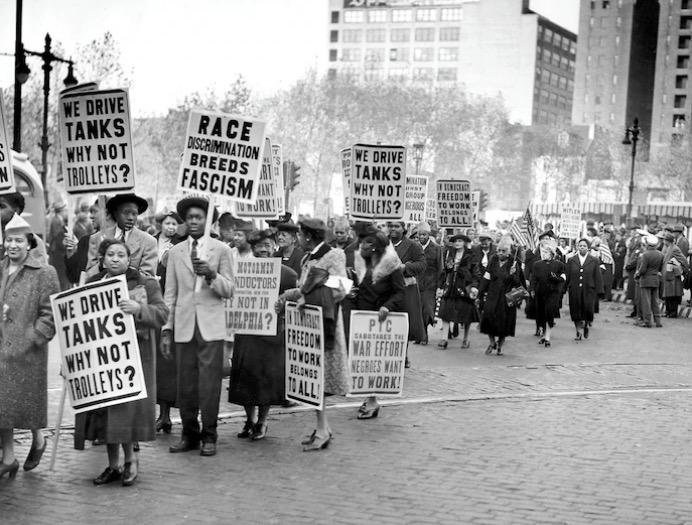 In 1944, African Americans in the Philadelphia area rallied to support eight black transit workers after their white colleagues walked out due to their promotions. Image via the Washington Post.

Nearly eight decades ago, African Americans in the Philadelphia area rallied to support eight black transit workers after their white colleagues staged a walkout due to their promotion to positions that were previously considered reserved for whites, writes Dustin Waters for The Washington Post.

With nearly 4,500 white transit workers striking, trolleys and buses sat idle, the subway stopped, and one of the leading wartime manufacturing centers in the country also seized production.

To curtail the violence that they feared was coming, city officials summoned state police and forbade the sale of liquor. Still, fights broke out across the city and some 200 people ended up arrested and many more suffered injuries.

Federal grand jury investigators looked into the true cause of the strike. They determined that after Philadelphia’s transit employees had elected the Transport Workers Union to represent them, a competing labor group allegedly used race-baiting propaganda to incite its white members.

“It is a new and different Philadelphia Story, another stirring episode in the struggle for genuine democracy and equality of opportunity in America,” wrote Reginald Johnson and Julius Thomas of the National Urban League at the time.

Read more about the protests at The Washington Post by clicking here.