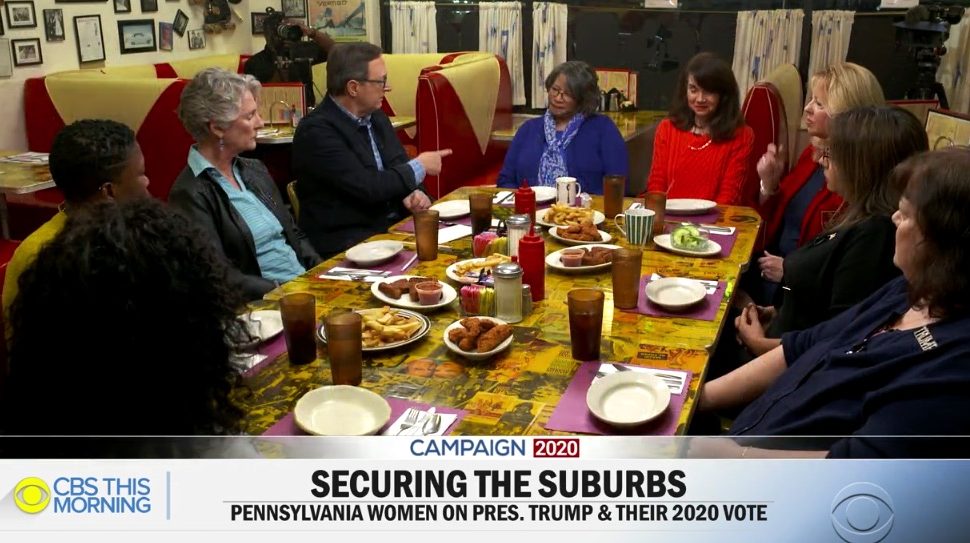 Eight suburban Pennsylvania women from across the political spectrum sat down at Jem restaurant in Norristown to talk about their voting plans for 2020 election. Image via CBS News.

With the Pennsylvania suburbs and especially its women voters once again poised to play a key role in the upcoming presidential election, Anthony Mason of CBS This Morning sat down with eight suburban Pennsylvania women from across the political spectrum at Jem restaurant in Norristown to talk about their voting plans for 2020 election.

The eclectic group of women ranged from long-term registered Democrats and Republicans and independents to recent crossovers between the parties on both sides.

The four women who identified as Republican or Republican-leaning already knew their votes were going to Trump. However, the remaining four were still weighing their options as to whom to throw their support behind in the Democratic primaries – with several saying that they were settling for a “lesser evil.”

“I want somebody I can look up to, somebody who has dignity, somebody who is not a bully,” said Melinda Wollf, a former registered Republican who changed parties last year.

Watch the entire segment at CBS News by clicking here.

Montco-Accessible Dog Parks: Great for Laps with Labradors and Strolls with Staffordshires