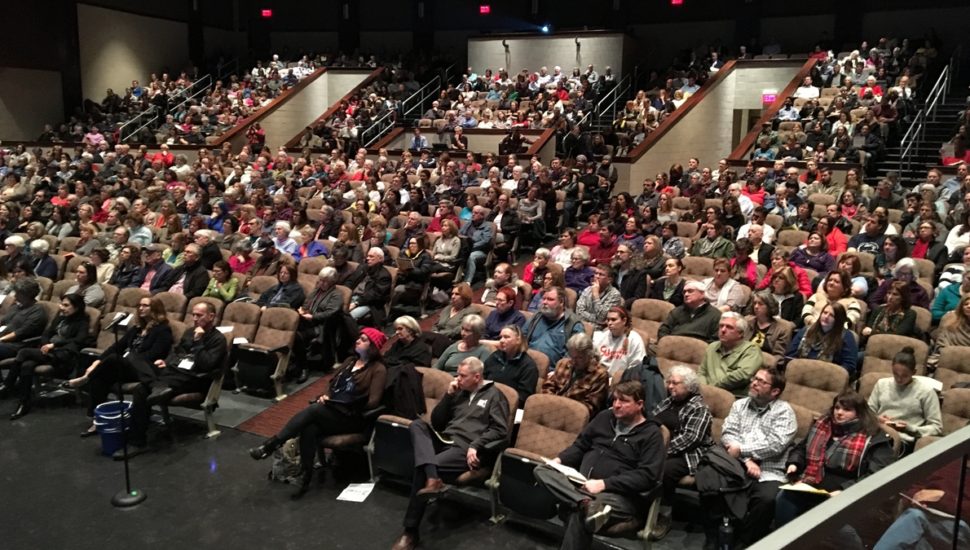 Over 600 people showed up at the Fair Districts PA meeting in Montgomery County last week to discuss ways to combat gerrymandering. (Image via NewsWorks.org)

Over 600 people turned out for a meeting organized by the Fair Districts PA in Montgomery County last week, to discuss the effects and possible ways of combating gerrymandering in the state, writes Dave Davies for NewsWorks.

The Fair Districts PA is a coalition of groups that includes the League of Women Voters, Common Cause, and the Commonwealth Foundation. They are taking on a problem that has been plaguing many states and in particular Pennsylvania.

During a presentation at Upper Dublin High School in Montgomery County, Carol Kuniholm of the League of Women Voters emphasized the harmful effects of drawing district lines to gain political advantage.

One of the proposals was a bipartisan commission of eleven non-politicians who would be in charge of drawing congressional lines.

“Your county should have one congressional district, and your congressman should be thinking about nothing but you,” stated Kuniholm.

Read more about this issue at NewsWorks by clicking here.

First Black Female Commissioner: ‘I Haven’t Seen a Lot of People Who Look Like Me in Key Leadership Roles’