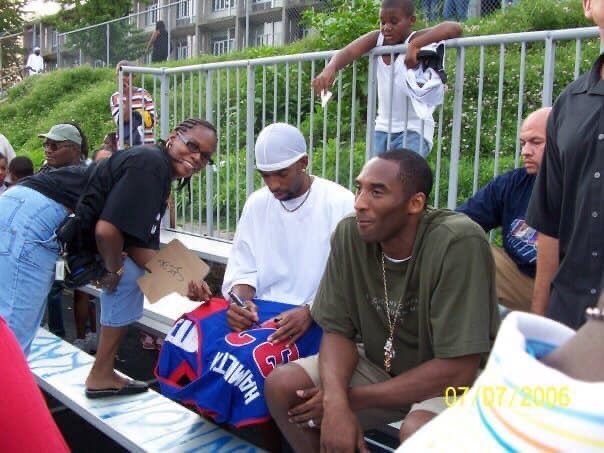 Lower Merion High School's Kobe Bryant, right, and Coatesville High School's Richard "Rip" Hamilton, shown here autographing his jersey, were fierce competitors on the basketball court and good friends off it. This picture shows the two of them at Ash Park in Coatesville in July 2006.

The news broke on Sunday afternoon, and after a couple of sleepless nights, it still doesn’t seem real to me.

NBA icon Kobe Bryant — the pride of not just Lower Merion High School and the Los Angeles Lakers, but of the global basketball community — and his 13-year-old daughter were among nine people killed when the helicopter they were traveling in crashed in the hills of Southern California.

I’m still in a state of shock, and probably will remain so for quite some time. Kobe, 41, and I are roughly the same age, and although I never had a conversation with him, our paths as basketball players in suburban Philadelphia crossed a few times during our teenage years.

Although I’ve been in love with the written word for as long as I can remember, I don’t particularly enjoy writing from the first-person point of view. I like to believe that objectivity has always been a part of my DNA, even before I cut my teeth as a journalist covering sports in my mid-20s. To me, writers should always stay out of the way. We may be telling the story, but we’re not a part of it.

At any rate, after sharing my remembrances of Kobe with my colleagues here at MONTCO Today on our Monday conference call, our publisher, Ken Knickerbocker, encouraged me to share them with our readers. So … here I am … writing … somewhat reluctantly … from a first-person point of view.

I first encountered Kobe in the summer of 1994, when we both were among hundreds of basketball campers at La Salle University. Before that week-long camp, I, like most other people outside the Lower Merion community, had never heard of Kobe. After that camp, though, I’ve never forgotten him.

Back then, Kobe was entering his junior year of high school at Lower Merion, and I was entering my freshman year at Coatesville. He had a goal of making it to the NBA; I had once dreamed of it.

Kobe, as one would imagine, was the star of the camp. He even beat Lionel Simmons — the La Salle product and fourth-leading scorer in the history of NCAA Division I basketball — in a game of one-on-one. The L-Train, as Simmons was nicknamed, had just finished his fourth of seven seasons in the NBA as a member of the Sacramento Kings, and he was a guest speaker at the camp.

Although I was sure I was witnessing greatness, I was hesitant to fully embrace it, mostly because there was another hoops star of the same age in my basketball-rich hometown, one whom I wanted to believe was just as good, if not better than Kobe.

When I returned home from camp that summer, I would tell anyone with even a slight interest in basketball about this player from the Main Line, and just how good he was. “You’re never going to believe how good this dude is,” I would say. “I’m talking future NBA All-Star.”

Oftentimes, my enthusiasm was met with skepticism. I’m sure most people just wrote it off as the hyperbolic words of a teenager, one who’s young age could only offer him a few years as his frame of reference.

And then I looked at Coatesville’s basketball schedule. Lower Merion was going to play the Red Raiders in Coatesville during the regular season. I wish I could say that Kobe and his teammates came into our gym like lions and left like lambs. Rather, it was the opposite. Kobe bested our superstar-in-the-making, Richard “Rip” Hamilton, and carried Lower Merion to a thrilling overtime victory with a sensational individual performance that people in Coatesville still talk about like it happened yesterday.

Later that winter — when I was a pimple-faced freshman on one of Coatesville’s two ninth-grade teams — our varsity lost again to Kobe and Lower Merion at the Palestra in the District One Class 4A semifinals. (Lower Merion’s season soon ended to Hazleton in the second round of the state playoffs.)

Those two losses set the stage for the next year, 1995-96, when Kobe and Rip were seniors and soon-to-be roommates at the McDonald’s All-American Game. Lower Merion and Coatesville — where I was a sophomore on the junior varsity that year — were on track to meet again.

And we did, back at the Palestra in the District One Class 4A semifinals. The University of Pennsylvania’s Palestra, the legendary home of the Big Five, seats 8,722 people. If you ask anyone who attended the game that night, me included, there were 10,000 people in the stands and about 7,000 of them were from Coatesville. That’s how badly we wanted our revenge.

Unfortunately, we squandered a lead in the waning minute and a half and lost another heartbreaker.

Kobe went on to win the PIAA title, escort pop star Brandy to his senior prom, and declare for the NBA Draft at a press conference that was attended by Boyz II Men. Meanwhile, Rip took a more circuitous route to basketball stardom, having attended college at the University of Connecticut, where he won a national title in 1999.

Kobe and Rip met later, though, with the stakes as high as ever, and Coatesville finally got its redemption.

The Lakers, who started the 2000s by waltzing to three straight championships behind Kobe and Shaquille O’Neal, faced Rip and the Detroit Pistons in the 2004 NBA Finals. Rip led the underdog Pistons to victory, and in my mind, all was right with the world.

“It still eats at me. Absolutely does,” Kobe said in 2015. “I’m upset that I gave Richard Hamilton something to brag about. Up until that point, he never beat me. That just kills me.”

“I loved it,” Rip told CBS Sports in 2016. “If there is anything I love in my life other than my wife and kids and my family and everything like that, I loved getting the opportunity to beat him at the highest level. There’s nothing higher than the NBA Finals. For me, I used to tell (teammates) Ben (Wallace) and Chauncey (Billups) and them, ‘Dudes, come on, man, let’s make sure we come correct because I can’t go home thinking he beat me in high school and he beat me in the NBA.’”

Fast-forward all these years, and here we are today, trying to process an unspeakable tragedy. Four years into his retirement, Kobe is now eligible to be inducted into the Naismith Memorial Basketball Hall of Fame. As one of the greatest players of all time, he’s a lock for that honor. But who would’ve thought that it would be a posthumous one? It’s sad to think that a legend who has had such a profound impact on the sport — he played 20 years with the same franchise, won five championships, and scored 33,643 points — won’t deliver his own Hall of Fame speech.

Mostly, though, I mourn because I have to write in the past tense about someone my age who once seemed invincible. I mourn because I’m reminded of the frailty of it all. That we can be here one day and gone the next.

New Kobe Bryant Book Covers His Years in Italy, Lower Merion, and How They Helped Shape Him into a Star