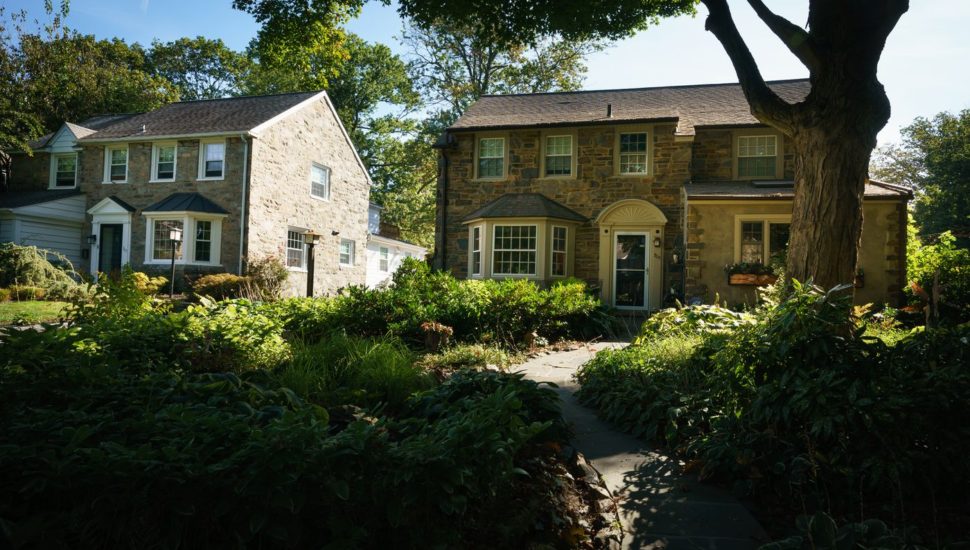 These side-by-side houses in Wynnewood look very much alike from the outside, but their owners chose very different interior decor. Image via Jessica Griffin, The Philadelphia Inquirer.

Two stone Colonials that sit side by side in the Wynnewood section of Lower Merion are nearly identical on the outside but vastly different on the inside, writes Sally A. Downey for The Philadelphia Inquirer.

The two four-bedroom, two-story homes were built around 1939 and externally are mirror images of each other.

Then last April, the homes and their owners, Adrian and Steven Seltzer and Lisa and Dave Taddei, were featured on Ardmore Library’s Kitchen Tour.

The Seltzers bought their home in 1985. In the late 90s, they remodeled the kitchen and further up  graded it three years ago.

As part of the upgrade, the pair put a backsplash mural of fused glass over the stove depicting French vineyards and farmhouses.

The Taddeis purchased their home 11 years ago. They completely renovated the kitchen three years ago, as well as their family room, mudroom, and powder room.

And despite all the differences and the generational divide, the neighbors have been good friends ever since the younger family moved in.

Read more about the two homes at The Philadelphia Inquirer by clicking here.