Home Archive Battle on to save the historic Ardmore movie house

Battle on to save the historic Ardmore movie house 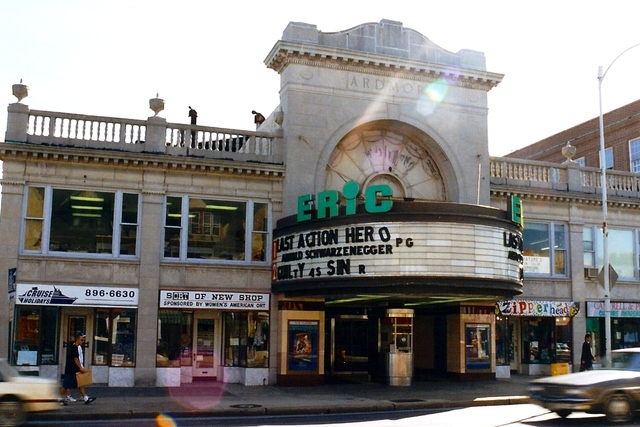 Due to pending zoning code changes, the historic Ardmore Cinema may become an apartment complex. Some residents are not pleased. (Image courtesy of cinematreasures.org).

The Ardmore Cinema closed almost two decades ago. The current occupant is an outdoor furniture store that advertises on the marquee that once displayed movie showings, writes Erin McCarthy for The Philadelphia Inquirer.

Due to pending zoning code changes, the historic theater may soon become a seven-story apartment complex.

In the latest proposal received by Lower Merion, developers intend to demolish the back of the old building and construct a seven-story, 18-unit complex, said Christopher Leswing, director of the township building and planning department.

They proposed keeping the facade and outfitting the marquee with a retro design, reflecting its 1920s roots, added Leswing.

“That’s been a very underutilized site,” Leswing said. “It’s a big old theater site. … It wasn’t meant to be a retail space.”

There has been a lot of debate over development in Lower Merion. Ardmore has been preparing to enact a new zoning code and has seen a residential and retail construction boom.

It’s not abnormal to see an uptick in development proposals when a town is about to change its zoning code, said Leswing.

The new zoning code will allow buildings to exceed four stories in height in the commercial district, and could be set in place as early as next month.

Some residents are concerned about over-development. They don’t want Ardmore to lose its small-town feel. Several residents spoke out against the new zoning code in a historical board meeting last month.

Jean Lavassaur is an Ardmore resident and retired social worker. When she first heard about the theater proposal last month, she said, her first thought was, “Oh my God, not another one.”

Lavassaur has watched the skyline slowly change though her apartment window. She is involved with the Ardmore Progressive Civic Association and sees the theater plan as “another concrete, flat, plain, unimaginative thing that blots out the sky.”

The Lower Merion commissioners will have the final say in whether the complex is constructed, according to township officials.

To read the complete story go to philly.com