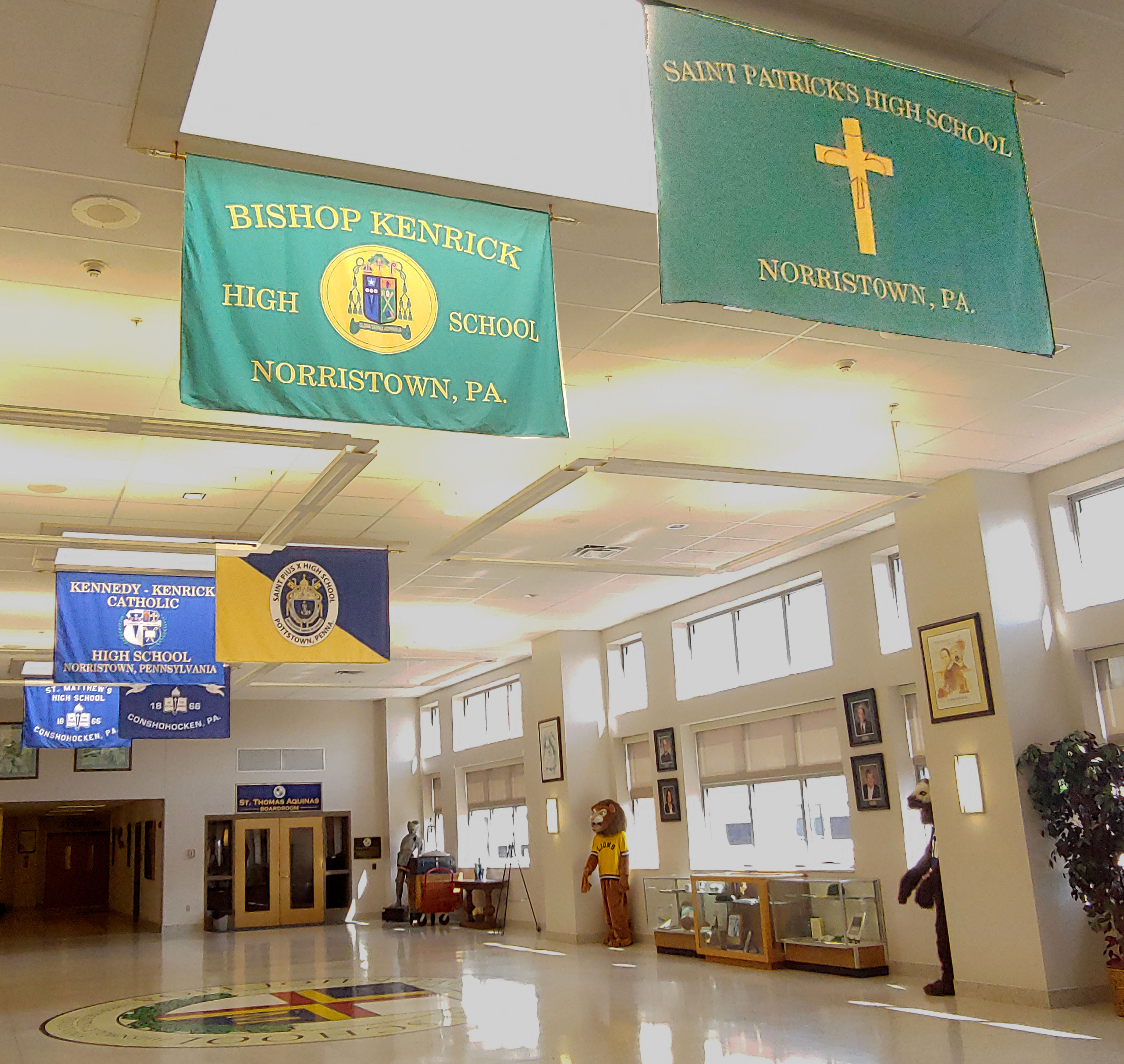 The Legacy Atrium of Pope John Paul II High School is home to the legacy mascots - the Winged Lion of St. Pius X; the Wolverine of Kennedy-Kenrick; and the Knight of Bishop Kenrick. Also featured in the atrium are cases displaying memorabilia from each of the schools.. (Photo courtesy of Kaitlyn Rodgers)

When  Pope John Paul II High School hosted an alumni event in January for graduates of Bishop Kenrick High School in Norristown, nearly 200 alumni from the legacy school showed up at the new high school in Royersford.

The event marked the first time that many BKHS grads and teachers had been to the school that replaced Kennedy-Kenrick Catholic High School, the successor to Kenrick as well as Conshohocken’s Archbishop Kennedy, writes Gary Puleo in The Times Herald.

Jason Bozzone, president of PJP, said, “They shared with me their mission and I was deeply moved and impressed for what they do each and every year,” Bozzone said. “I learned that in 1999 members of Bishop Kenrick High School’s Class of 1976 wanted to honor Michael Petrone, a classmate who died a year earlier, in 1998, while undergoing a heart and kidney transplant. The foundation was formed to support charities that reflected the four most important things to Mike … family, friends, children and his home town of Norristown.  Since 1999 members of the Petrone Foundation have worked to honor the memory of their dear friend by helping those in need.”

Since arriving at PJP, Bozzone said he began expressing to the legacy alumni that if ever they wanted to host a reunion or event at Pope John Paul II High School the space would always be available to them at no charge.

“This is my third year as president and from my first year it was really important for me to understand our legacy alumni,” he noted. “I understood right away how John Paul was built and the how the merger of Bishop Kenrick and Archbishop Kennedy, with St. Pius X, all came into one. It was important for me to understand that culture because it’s very important to celebrate the past and the future for us to be successful at Pope John Paul. It’s so important for us to bring our Kenrick folks back because Kenrick is really the foundation of who we are. The most important thing we do is to provide a high quality Catholic education,” Bozzone added, “but a lot of things we do stem from our legacy schools like Kenrick.”

Bozzone said the April 27 “Stink Strong” event, which will be catered by Collegeville Bakery Pizzeria Napoletana, will raise awareness not only about the charitable organization and its many causes but also PJP’s role in every legacy school’s alumni celebration.