Zerns in Gilbertsville will close unless a buyer saves the day 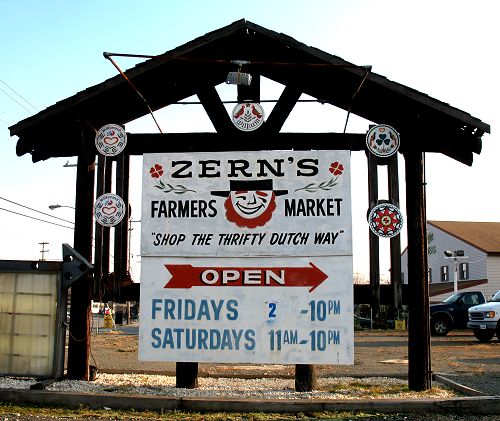 Unless a buyer willing to pay $4.5 million can be found Zerns Farmers Market, Gilbertsville, will close at the end of September. (MONTCO.today file photo)

Just four years short of a century in business, the owners of Zerns Farmers Market in Gilbertsville have announced they will close the storied location at the end of September unless a serious buyer is identified.

In the announcement made on the business’ Facebook page, owner Bobbi Gail wrote that “after much prayer, deliberation and financial analysis, we recognize that the current situation is not sustainable. It is time for us to close our doors.”

Located on 20 acres off East Philadelphia Avenue, just east of Route 100 in an sprawling complex that seems more to have evolved of its own accord over the years rather than been built with a design in mind, Zerns is an institution that could only have taken root in Pennsylvania, writes Evan Brandt in the Pottstown Mercury.

Although it was founded in 1922, Zerns main building was constructed in 1949 with 200,000 square feet of shopping space, along with various other “out-buildings.”

Regulars who head up to the site on Fridays and Saturdays — the only time its open — are said to be “going sailing” in order to take advantages the many sales offered by the compendium of vendors which comprise the whole Zerns experience.

Although there is certainly no shortage of farm products to be found at Zerns, it is home to so much more, with everything from comic books, to funnel cake, clothing, shoes, and toiletries, to old toys, old dolls and old tools — all for sale to the right buyer for the frequently flexible right price.

The landmark market has been on the market since December of 2016 at an asking price of $7 million, and, according to the post, inquiries have come from as far away as Dubai and Brazil, and as close as the Lehigh Valley.

“Though we have had several possibilities, we have not found the right buyer,” the note said.