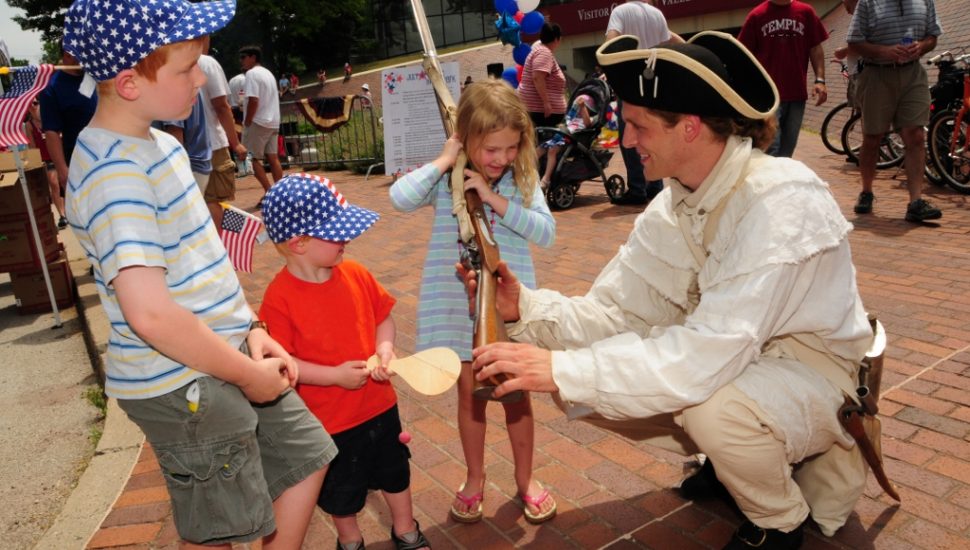 When it comes to celebrating the Fourth of July, nowhere surpasses the Philadelphia area for relevance, authenticity and atmosphere. It was here that the Second Continental Congress voted for independence from Britain, and here that the Declaration of Independence was written, approved and signed.

This year, the celebration sweeps into Montgomery County as the Valley Forge Tourism and Convention Board partners with Wawa Welcome America for a week of education and fun.

The suburban festivities will center on Valley Forge National Historical Park, the most storied 5 square miles in Montgomery County, which will host its annual Community Picnic on the holiday itself.

From 11 a.m. to 3 p.m., visitors can enjoy trolley tours through the park; walks led by national park rangers; storytelling; musket demonstrations; and a variety of games, crafts and activities for children. Although Independence Day pilgrimages are a long-standing tradition at the park, he hopes that the partnership with Wawa Welcome America will help spread the word and boost attendance, said Jonathan Parker, the park’s chief of interpretation.

The Community Picnic affords partygoers an opportunity to venture outside Philadelphia and see what Montgomery County has to offer, he added.

Of course, nothing of significance happened in Valley Forge on July 4, 1776. That day, the real action was going in Philadelphia. Over the centuries, however, the Fourth of July has come to stand for a host of events that led to American independence, and among those events, the Valley Forge encampment must rank near the top. Historians describe it as one of the turning points of the Revolutionary War.

Although no battles took place at Valley Forge, the winter of 1777-78 helped to transform George Washington’s army, a motley collection of volunteers from 13 squabbling colonies, into a national fighting force. Indeed, for Parker, the word “transformation” most neatly sums up the experience.

“The army that left Valley Forge was better trained, better supplied, better prepared than the army that entered six months earlier in December of 1777,” Parker said. “We think of ourselves today as the United States, but there was a wide variety of individuals from various colonies and states. Some spoke difference languages. The army needed to take time to unify their training standards and techniques. They were fighting the best equipped fighting force known to man at that time—the British Army.”

In addition to the Community Picnic, the Tourism & Convention Board will highlight the county’s Patriot Trails and Arts Montco brand. From the Philadelphia waterfront to the downtown area and out to Montgomery County, Wawa Welcome America will present 50 free happenings from June 28 through July 4, including a free concert on the Benjamin Franklin Parkway headlined by Pitbull, Hoagie Day, a parade, a birthday party, two firework shows, and free admission to 18 museums throughout the week.

For a listing of holiday events throughout Montgomery County, click here.

Following is the schedule of events at Valley Forge National Historical Park on July 4:

Ranger-led Walks
Begins in front of Park Theater | 10:50 a.m. and 2:50 p.m.
Join a Valley Forge National Park Service Ranger for a short walk up to the Muhlenberg Brigade Huts. Witness soldier life demonstrations and have the opportunity to ask the “soldiers” about life at Valley Forge during the 1777-1778 winter encampment.

Dress-up like a Colonial, make your own finger print flag, decode a Revolutionary War spy message, dunk the tax collector, sign your name to the Declaration of Independence, and more. All activities are free.

Listen as Once Upon A Nation storytellers share stories of the Valley Forge encampment and how it became a turning point in the Revolutionary War. Benches are located on the Train Station platform at Washington’s Headquarters, in front of the Visitor Center, and near the Muhlenberg Brigade Huts.

Secrets and Spies
Washington’s Headquarters | 12:30 p.m. and 2 p.m.
George Washington needs your help!. There’s rumor of a plot to have him kidnapped at Valley Forge. Be the first to enlist and join an American spy network to uncover the traitors involved. The program is presented with children in mind, but fun for participants of any age.

Grilled hot-dogs and hamburgers, cold beverages and other refreshments will be available throughout the day at the barbecue tent.

Bleats and Treats: Amish Farm & House, Lancaster, Has Unique Ways to Get into the Holiday Spirit