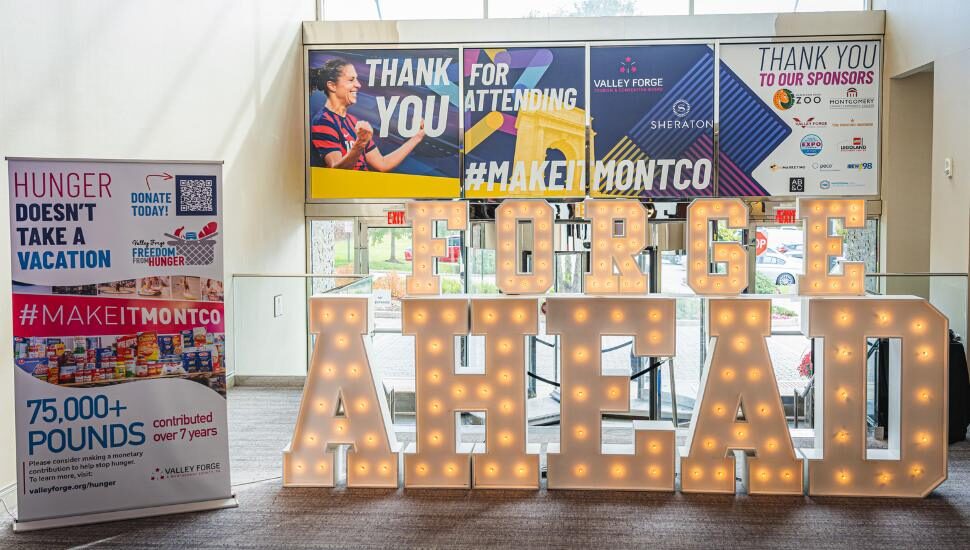 Image via VFTCB.
The VFTCB's 2022 Annual Luncheon had a "Forging Ahead" theme to underscore its ongoing recovery from the pandemic.

The Valley Forge Tourism & Convention Board (VFTCB) shared an optimistic outlook for tourism in Montgomery County to 450 attendees at the organization’s first in-person annual luncheon in three years. The meeting, bearing a theme of “forge ahead” took place at the Sheraton Valley Forge in King of Prussia.

The Sixers STIXERS Marching Band and the Amped String Quartet performed for the crowd, which cheered for the World Series–bound Philadelphia Phillies. Other attendees included:

The host hotel — the Sheraton Valley Forge — will complete a guest room renovation by end of this year. The $4 million project for 2023 will renovate (or construct) public areas, meeting space, a new restaurant, bar concept, and club lounge.

An event after party at the property was sponsored by the hotel and the Elmwood Park Zoo, which was in honor of its upcoming centennial celebration.

The occasion marked the release of the VFTCB’s 2022 annual report.

It highlighted the positive economic impact of the hospitality industry in Montco, reporting performance levels close to prepandemic levels.

Tourism continues to be a key driver of the economy in the third largest county in Pa. In 2021, visitor spending in Montco generated $1.4 billion in positive economic impact. That’s up 46 percent ($443 million) from 2020. It’s also within $200 million of 2019 levels, according to Tourism Economics, the international travel-data analytics firm whose U.S. headquarters is in Wayne.

“We’re gaining back ground in the right direction, and seeing positive momentum,” said VFTCB President & CEO, Mike Bowman. “I’m so proud of how the VFTCB staff has overcome obstacles to support our hoteliers and our entire tourism industry in Montco. Their commitment to creativity is amazing, and that’s one of the many reasons why Montgomery County continues to lead and outperform the region.”

Booked room nights were also back up to 1.9 million last year, and room revenue recovered to $206 million, which outpaced results in the Phila. region and periodically surpassed monthly 2019 figures. Visitors also supported more than 17,000 jobs in Montco, according to Tourism Economics.

So far this year, Montgomery County is leading the suburban counties with an average daily hotel room rate of $126.76. Montco’s year-end forecasted revenue ($250.7 million) is just one percent shy of 2019 levels ($253.8 million).

Next year’s hotel demand and economic impact for the county are expected to grow, forecast to exceed 2019 levels by mid-year with record highs anticipated in 2023 and beyond, according to Smith Travel Research.

The VFTCB’s award-winning sports team also announced that 2022 will be another record-breaking year. The 100 events it assisted produced more than 85,000 total room nights and generated $65 million in positive economic impact. That performance is up 14 percent year-over-year and is 20 percent higher than prepandemic levels, according to Lisa Karl, VFTCB VP of Sales & Strategic Partnerships.

Guest speaker and two-time Olympic gold medalist Carli Lloyd addressed the luncheon’s theme of forging ahead by discussing achievements that included her overcoming on- and off-field obstacles, being a woman in the world of sports, and advising young competitors.

The VFTCB’s marketing and communications team announced a brand-new way to enjoy the county’s breweries, wineries, and distilleries. Its Montco Makers Passport is a gamified check-in process for visitors to win prizes as they sip their way across the county.

More than a hundred visitors have participated in its soft launch.

The organization also shared data-driven marketing plans, such as flying banners over 12 million beachgoers up and down the Jersey shore and sponsoring weather cameras on both NBC 10 and FOX 29.

The VFTCB also redesigned its website. It now speaks to travelers in a whole new way, providing:

The revamp was undertaken to help raise awareness and increase visitation to the county’s attractions, hotels, restaurants, and events.

The organization, having vowed its continued support for restaurants with Crave Montco Month in July, drew 23,000 website visits to the brand’s content website, a 485 percent increase.

Crave Montco is one of several market-specific marketing efforts for the organization. Each Sept., for example, its Art Montco Week contains a jazz fest and art wall installations at:

The Visit Valley Forge’s social following has shown healthy growth. One driver of engagement has been its own TikTok channel; the VFTCB is one of the first destination marketing organizations to begin posting TikTok content.

The VFTCB has also seen 670 editorial mentions (highest in the region), with a reach of 847 million to date.

Hotel Tax in Montgomery County Doubles From 2 to 4 Percent