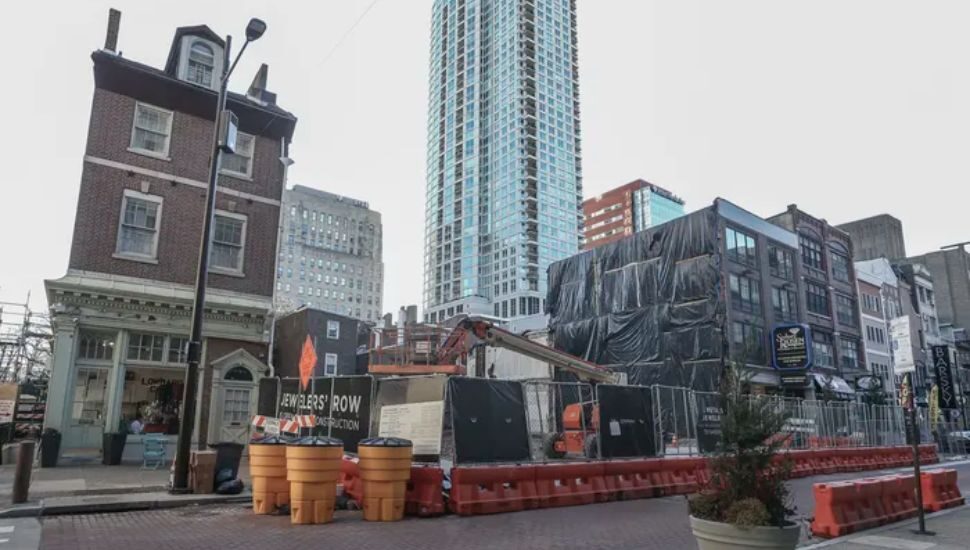 Image via Steven M. Falk at The Philadelphia Inquirer.
The corner of Seventh and Sansome Sts. on Jeweler's Row, transferring from Toll Brothers to another developer.

A diamond-in-the-rough empty lot on Jewelers Row — acquired by Horsham’s Toll Brothers in 2019 — is going back on the market. Jake Blumgart’s Philadelphia Inquirer story detailed the now-vacant real estate’s opportunity for another visionary to transform it into a Center City gem of development.

When Toll Brothers purchased the property, it also took ownership of the buildings it held, some of which dated to the late 1800s and early 1900s.

It cleared the land of all structures, absent any designation of the architecture warranting historic preservation, in executing its plan to replace them with luxury condominiums.

The pandemic then interfered, tamping down demand for city residences, especially those in the ultra-luxury category Toll Brothers had targeted.

Jim Pearlstein, president of Pearl Properties, has not announced intentions for the land; however, Rich Goldberg, president of the Jewelers Row District, heard from Pearlstein directly that the site would “…most likely be something similar [to the Toll Brothers’ plan], but incorporating retail and possibly a restaurant on the ground level.”

Despite ongoing economic factors affecting the regional residential real estate market, activity downtown remains strong. Several other residential developers have planned, and are moving forward with, Center City high-rise apartments of their own.

More on the fate of a now-deserted Jeweler’s Row plot is at The Philadelphia Inquirer.

This Travel and Adventure video covered a 2018 street festival on Jeweler’s Row, capturing its pre-pandemic vitality.