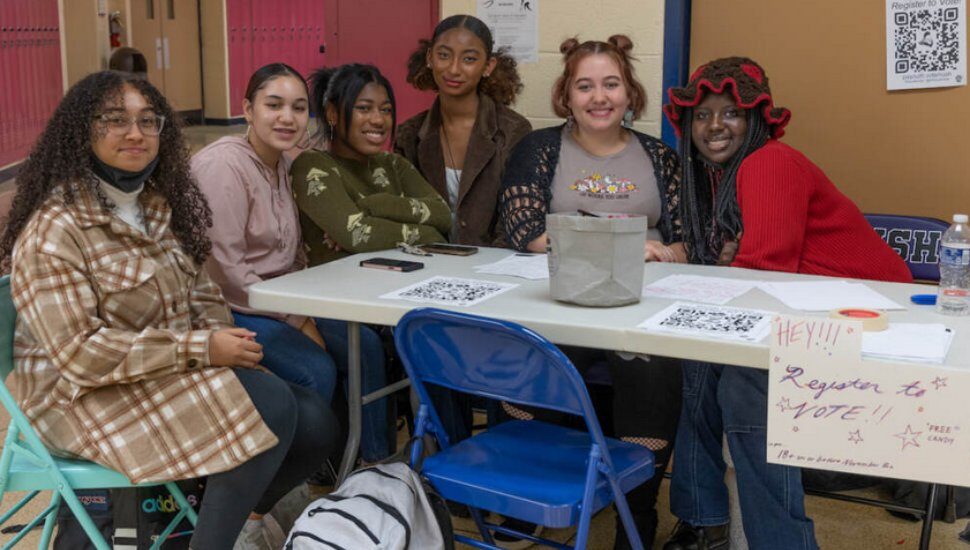 Image via Kimberly Paynter at WHYY.
A group of students at The Fine Arts Academy at Benjamin Rush in Phila. have been hired by PA Youth Vote for a bipartisan school effort to promote voting; the organization's next move has been announced as Montgomery County.

PA Youth Vote — a nonpartisan, regional nonprofit that works to inspire first-time voters — has been busy at numerous Phila. high schools. Its recent effort at The Fine Arts Academy at Benjamin Rush, for example, resulted in a 25 percent rise in voter registration of eligible students. From that success, the organization now plans to address Montgomery County’s fledgling ballot-casters, hoping for similar results. Aubri Juhasz was elected to bring the story to WHYY.

At Benjamin Rush, PA Youth Vote advocates (paid students and teachers) positioned themselves near the cafeteria and repeatedly queried the passing throngs in the hallway: “Are you 18 years old?” “Have you registered to vote?”

If the answers are yes and no, respectively, a QR code and a cellphone quickly took care of the details.

Through their efforts, 89 percent of Benjamin Rush students will cast a ballot for the first time on Nov. 8.

The next geographic destination for PA Youth Vote to bolster a Nov. 8 turnout is Montgomery County.

The organization has prioritized the county, owing to its appreciation of the importance of the issues here and knowledge of the widely divergent opinions on them.

Voting day results on criminal justice, freedom of expression, reproductive rights/responsibilities, and a host of other concerns could hinge on just a handful of ballots, underscoring its point that every vote is important.

More on the work of PA Youth Vote to inspire first-time, young-adult voters is at WHYY.