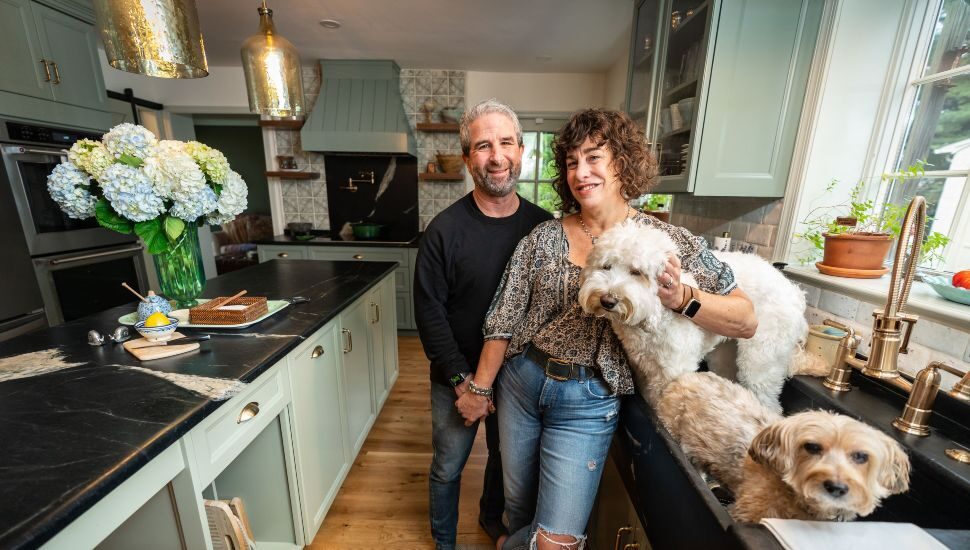 Image via Jessica Griffin at The Philadelphia Inquirer.
Joel Fishbein and wife Rachel Ezekiel-Fishbein in their newly renovated kitchen with their dogs.

Joel Fishbein and his wife Rachel Ezekiel-Fishbein will comfortably gather tomorrow for an expertly cooked Thanksgiving feast, produced in a refreshed kitchen. Terri Akman constructed their story for The Philadelphia Inquirer.

The couple’s Tudor-style residence has been their home for 23 years.

That stretch meant a lot of family celebrations prepared and served in the cramped quarters of the circa 1929 dwelling.

They suspected that a former owner also grew impatient with the claustrophobic kitchen; the Fishbein renovation revealed evidence of a 1950s-era overhaul.

The former fix may have worked in the past, but the Fishbeins found that over time, “…it really wasn’t functional,” Joel said.

In early 2021, they hired a neighborhood interior designer and rattled off their improvement wish list. The top priority was storage, more of it and reflecting a more convenient layout; they had grown tired of bending low or stretching high to reach shelving.

Some of what they envisioned fit within the budget (custom cabinetry) while some (double sink) did not.

The overall design aesthetic was for softness, so that the additions would not look out of place in a classic home.

Now that the project is complete, Rachel has had plenty of space to assemble a Thanksgiving feast whose conclusion will be five home-baked pies, crafted in non-elbow-bumping splendor.

A more extensive look at the the Fishbeins’ new kitchen is at The Philadelphia Inquirer.

To Spare Its Priceless Treasures During a Significant Renovation, Glencairn Museum Has Lent Them Out