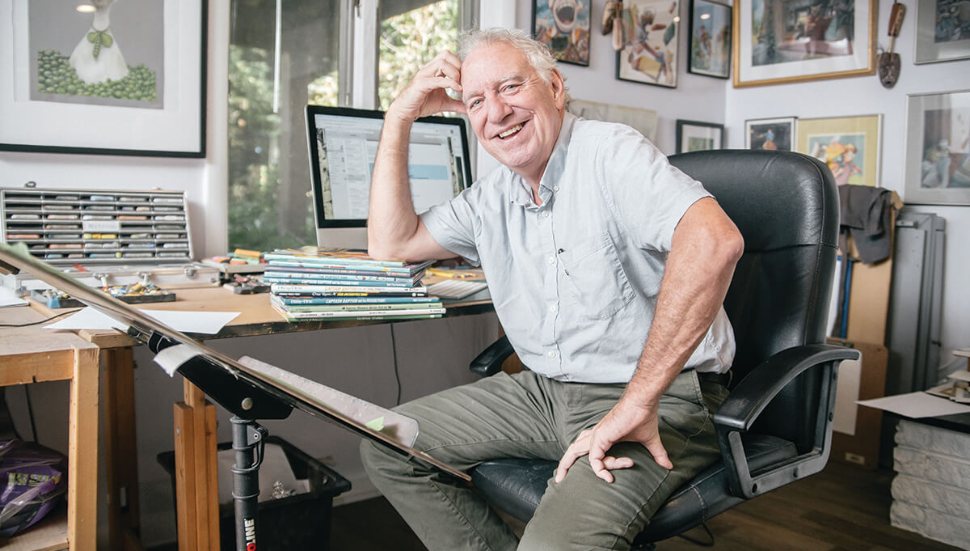 Children’s book illustrator Kevin O’Malley, born and raised in Lansdale, has produced drawings to accompany almost 100 stories. His motivator? A youthful sense of humor, even at age 61. Janelle Erlichman Diamond drew upon her writing skills to feature him in Baltimore Magazine.

O’Malley’s childhood was enriched by books, with Where the Wild Things Are being an early favorite.

“The book has a wonderful picture of a boy in a wolf suit chasing after a dog with a fork — it was the first time I saw a boy acting like I act,” he recalled.

He started drawing himself. And his father’s introduction of the films of Charlie Chaplin got him to imbue his sketches with humor.

After high school, he attended the Maryland Institute College of Art, submitting proposals to book publishers.

His first assignment there was the illustration of a folk song. But O’Malley’s depiction of some of the plot’s darker sides — robbery, smoking, drinking — resulted in its banning by Baltimore County Public Schools.

But success quickly followed, driven by original tales like The Box (a cardboard box rockets a boy to space) and Bruno You’re Late for School (a rhinoceros searches for homework).

A current joy is reading aloud at area elementary schools, where silliness still juices up O’Malley.

“The fun part is watching parents laugh, teachers laugh,” he says of these visits. “The kids are easy. You say ‘fart’ and you get them.”

To sketch in the remaining details of illustrator Kevin O’Malley, read the Baltimore Magazine source story.

Lower Merion Author Proves That Not Giving Up Pays Off