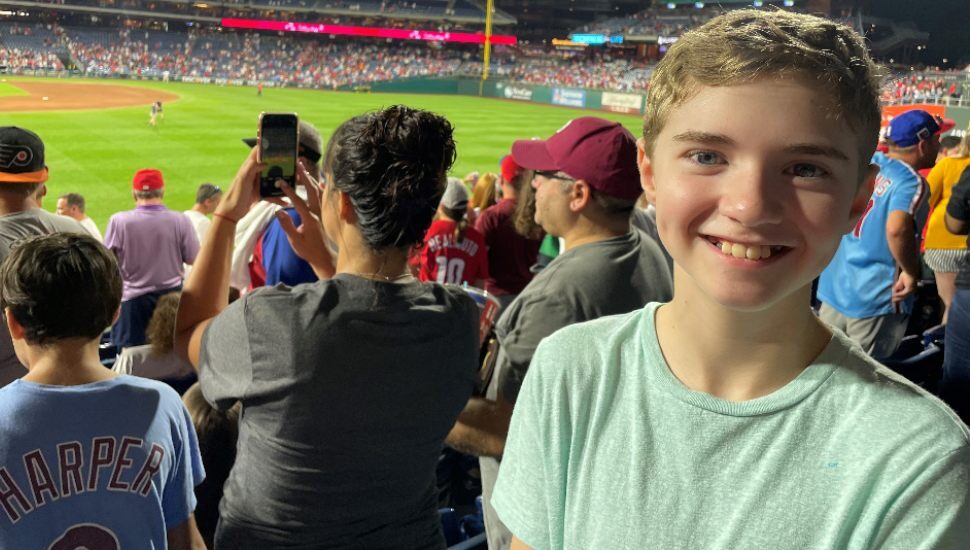 As the Phils spent an Aug. 23 night squeaking by the Cincinnati Reds in a ninth-inning nail-biter, one fan was not only thrilled to watch the win, but he was also experiencing a dream-come-true moment with his family.

Thanks to support from Firstrust Bank and Casey Cares Foundation (a Maryland charitable organization that uplifts critically ill children and their families), 11-year-old Phillies fan Rhys Williams watched the victory first-hand with his mother Kim and his father Brett.

The outing — as are all experiences organized by Casey Cares — was designed to provide a break for a family under the steady pressure of caring for a child with a complex medical past.

Rhys has eosinophilic esophagitis (EoE), an allergic condition that inhibits contractions in the gullet that transport food and liquid from the mouth to the stomach.

As with other allergies, the immune system automatically disburses an army of white blood cells to counteract what is perceived as a threat.

The congregation of white blood cells thickens the esophagus, leading to medical issues that include abdominal pain, the threat of choking, and poor weight gain, especially in children.

Although there are tactics to mitigate the problem (avoiding certain foods, for example), there are no specific medicinal cures.

Rhys’ physicians outfitted him with a feeding tube five years ago, which has improved his overall health.

“He’s doing very well,” said Kim Williams, his mother. “His EoE is being managed well, and he is growing like a weed. [The tube feeding] has made a world of difference in his health. He and his siblings are settling into their new school year nicely, too.”

Rhys is now a sixth grader, having transitioned into middle school.

The Williams family caught the Phils-Reds matchup from a row of primo seats that were made even better by perfect weather for a game.

Rhys was all eyes.

“He asked a lot of questions,” Kim said. “He watched the pitchers warming up in the bullpen. And he enjoyed seeing the Phillie Phanatic do his thing!”

Best of all was perhaps the final score 7–6, Phils.

“He also got to experience that exciting winning feeling.” Kim related. “He was so excited they won it at the bottom of the ninth, too. Such fun!”

More than Just a Baseball Outing

As it does with all its families, the Casey Cares Foundation — bolstered by the corporate support of Firstrust — has embraced the Williams family, providing ongoing support to make their lives just a little bit better.

Its business model is not one of granting one wish and then fading away.

“Since our social worker at the hospital helped make the connection with Casey Cares, we’ve been able to enjoy a few fun things as a family that might not have been on our radar to do,” explained Kim.

The ability to step away from their home setting and enjoy the group pleasures of an average family is especially appreciated by the Williamses. Without it, a large-scale outing to a night as ordinary as a baseball game would be well beyond the budget of a family of five with one child having EoE-related medical needs.

Through the generosity of Casey Cares and its donors like Firstrust, the Williams clan has been able to take short jaunts that have included the Baltimore Aquarium, Monster Truck Jam, a Philadelphia Union game.

Even at-home pleasures have been easier to access for the family dealing with a youngster’s EoE.

“Rhys has been sent gift cards, which he used to buy Legos after hospital stays and surgical procedures.” Kim related.

“And Casey Cares never, ever forgets his birthday.

“The organization has definitely helped us make some fun memories thanks to the generosity of its donors.”

With generous support and donations from Firstrust, Casey Cares is now able to provide additional customized activities to children and their families in the greater Phila. region.

Casey Baynes, Founder and Executive Director, says “At Casey Cares, we know how difficult life can be for families with critically ill children. We help keep families’ spirits high by arranging programming — whether it’s a simple movie night and a fresh pair of pajamas or attending a major sporting event.”

Baynes continues, “Casey Cares makes life a lot better by adding a personal touch throughout the year for families in Pennsylvania.”

Jon Chiodo, Firstrust SVP Healthcare Practice Finance Team Lead, summed up what it means personally for the leadership of the bank to help local families like the Williamses.

“We’re humbled and honored to play a part in helping families with critically ill children through our support of Casey Cares,” he said.

“Firstrust Bank is dedicated to supporting healthcare practitioners every day, connecting them with the resources they need to provide the best care for their patients.

“What Casey Cares does goes beyond patient care. The organization brings the gift of fun, joy, and laughter to families when they need it most,” he concluded.