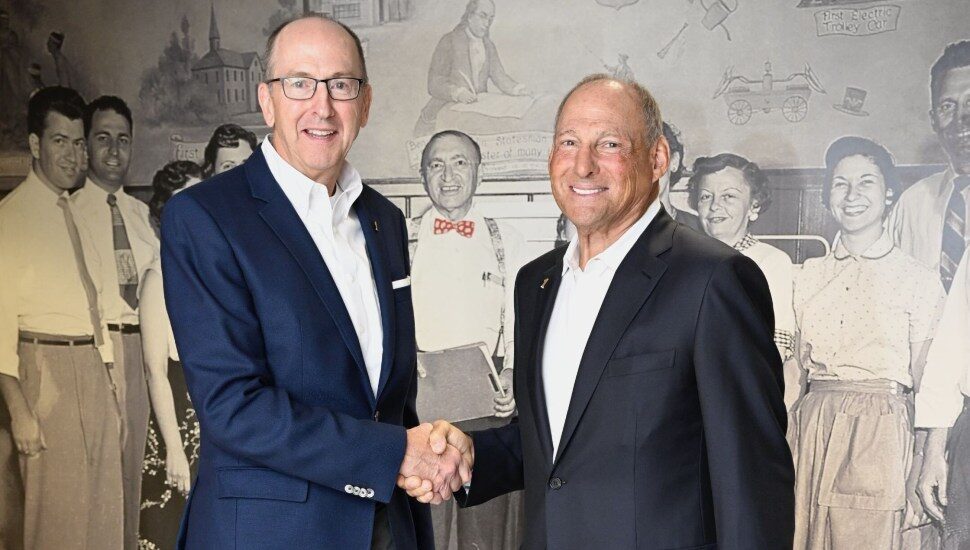 Firstrust Bank has announced that President Timothy J. Abell will become CEO as part of a long-planned executive transition that will ensure business continuity and growth for the region’s largest and strongest full-service, family-owned bank.

Current Board Chairman and CEO , Richard J. Green, who has spent his 45-year banking career building Firstrust, will become the Executive Chairman of the Board of Directors. Richard’s grandfather, Samuel, founded the bank in 1934, and during Richard’s career was privileged to have worked with both his grandfather, and father, Daniel.

Richard will remain the owner of the bank.

This planned transition will become effective on January 1, 2023.

As Tim Abell becomes CEO, Richard, in turn, will focus more fully on Firstrust’s continued growth as well as the expanding philanthropic work of The Green Family Foundation.

During his tenure as CEO, Green led several successful transformations for Firstrust, including:

Under his leadership, Philadelphia’s Hometown Bank and the Official Bank of the Philadelphia Eagles has become national in capability, technology and innovation, while remaining local and personal in its service to its customers and growing assets to more than $5 billion.

“Tim Abell is an exceptional banker and charismatic leader who lives and breathes the Firstrust culture and our commitment to our customers and the community, “ Green said. “I have had the privilege of working side by side with Tim for the past 18 years, and I have complete confidence in his leadership and ability to accelerate the bank’s growth and serve the community that we both love.”

Abell was born and raised in Philadephia and has longstanding ties throughout the community. He has served as Firstrust’s President since 2007 and as a member of the Board of Directors since 2016. He will be the first nonfamily member to serve as CEO, and he will remain President.

In his new position, Abell will be responsible for implementing the bank’s strategic plan, including guiding its digital transformation, and the overall growth of the enterprise. He will oversee the day-to-day operations of Firstrust, as well as its Apex Commercial Capital, Firstrust Financial Resources and Hatch Bank subsidiaries.

Abell has more than 30 years of experience working with businesses and entrepreneurs in the Philadelphia region. He joined Firstrust in 2004 and during his tenure has:

Prior to joining Firstrust, Abell was Market President for Fleet Bank in Philadelphia and Southern New Jersey.

“Firstrust is a special bank with a professional, caring and motivated team that is passionate about our customers and their success, and the well-being of the communities we serve,” Abell said.

“Richard has made an indelible mark on the bank and on the Greater Philadelphia community,” he added. “Fortunately for me and the Firstrust Family, he is stepping up, not down. As we continue to work together in our individual capacities, I am excited to grow the Firstrust legacy of outstanding customer service, commitment to the prosperity of our community while continuing to invest in our people, technology and innovation.”

Founded by Samuel A. Green, who began the business in his mother’s kitchen in South Philadelphia, Firstrust is currently in its third generation of family management, operating as Philadelphia’s Hometown Bank® for nearly 90 years.

Firstrust offers a broad range of retail and commercial banking products and services to individuals, businesses, and institutions. In commercial banking, Firstrust provides a wide variety of solutions, including commercial real estate finance, business banking, asset-backed lending, and deposit and treasury management services. Firstrust meets the need of its consumer customers by offering a full range of deposit, lending, and residential mortgage products. Firstrust is a Small Business Administration (SBA) Preferred Lender, is a Top Workplaces employer, the Official Bank of the Philadelphia Eagles and serves its customers through 19 branch banking offices located in Southeastern Pa., Cherry Hill, N.J., and Towson, Md.